This show was a MetroPCS Masquerade with Weezer presented by 101.9 RXP radio station. Nowadays, I don't listen to New York Radio or for that matter any music coming from an actual radio. I either listen to on-line Radio Paradise or NPR. Therefore, I was basically unfamiliar with the two opening bands. Although I have heard Matt & Kim before Saturday, without knowing it was them.

I loved PT Walkley and his band, who were the first performers of the evening. I'm sorry they didn't play more than eight songs because I wanted to hear more. PT Walkley was backed by a bassist, a rhythm guitarist, a keyboard player and a drummer. After seeing PT Walkley I did a little research. I found out that he has two CDs "PT Walkley and the Adventures of a Track Rabbit" and the new CD "Mr. Macy Waits Alone." (He was also part of a band The Blue Jackets and he has done music for films.) When I listened to the tracks on both CDs, I became confused. The band that played on Saturday night was energetic but the band I listened to on CD is more sedate. My guess is that PT Walkley chose songs for his set which would play well with the Weezer Halloween Audience. If that's the case - good move!

I can see why PT Walkley recently opened for Coldplay, the guy's songs exhibit great songwriting. Those which I heard in concert which I made sure I revisited on CD were "Overwhelming," "Daydreaming," "Somebody," and "Lower than the Ocean." I saw on Walkley's website that he has appeared at Joe's Pub. I hope he does it again - I would like to hear a full set.

Matt & Kim, worked perfectly in revving up the crowd for Weezer. Their music and act is part White Stripes, part Devo and part Fred Synder of the B52's. Dressing for the occasion, they appeared on stage as Andy Warhol and Eddie Sedgewick. After the first two or three songs, Matt got rid of the gray wig because it was just too hot.

Matt & Kim are a strange duo, whether they are in or out of custom. On Keyboard, Matts stage persona is that of dweebie sort of nerd with a voice to match. Kim, on drums, has the persona of bad girl who says fuck a lot and has a slutty attitude. At one point Kim stood up, in the bathing suit she was sporting, and said "Halloween is for two things - acting crazy and scoring." Together, Matt and Kim performed in front of a special set panel made up of two video screens.. There act was high octane as if they each had drank seven cups of coffee. The highlights were Gary Glitters "Rock-n-Roll, pt 2.," "5 K Girl" and their hit "Daylight." 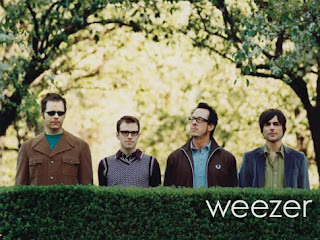 Now that I have seen Weezer in concert, there are two things about them that are definite. The first is that Rivers Cuomo is definitely an eccentrically comical and lovable nerd. The second is that Weezer is a high decibel, feedback loving, air guitar mimicking, real guitar power chord playing ROCK BAND, with fans body surfing to prove it. That doesn't mean that Weezer isn't a fan of pop and Hip-hop culture, it simply means that Weezer incorporates it into their music. For example, MGMT's "Kids" and Lady Gaga's "Pokerface" were part of Saturday night's encore. And while I'm on the topic, Rivers Cuomo has been including Hip-hop boastful attitudes and slang on the past few album's. On the current album he went even further by having Lil' Kim rap on the song “Can't Stop Partying." A lyric from another Hip Hop influenced new song “Let It All Hang Out” makes me crack up every time I hear it. Cuomo sings “Me and JD chillin' in the shack, sharing Chiclets from the same pack.” (I'm pretty sure it's JD and not Jay Z.)

Weezer's show guaranteed a good time for all. Weezer started the show in bug outfits because it was, after all, Halloween. For their entrance on stage they started with the guitar riff from "Seven Nation Army" by The White Stripes and quickly segued into their song "Hash Pipe." The packed house went wild!! One of my first thoughts was that they were going to be very hot if they wore those customs for the whole show. But, I worried too soon, the second song was "Undone-The Sweater Song." During the song, they had pre-picked audience members come on stage to take off their customs. Underneath the customs, the whole band was wearing white.

As I stated earlier, Rivers Cuomo is comical. He's a nerd with a bald spot in the middle of his head to match. (I was the old man in the second balcony who couldn't help but notice.) One of the things that I found really funny was the trampoline in front of the drummers’ platform. Rivers would jump on the trampoline then onto the platform to pose in a spread leg RocknRoll stance. Later he attempted a Michael Jackson moon-walk which didn't quite cut it but was nonetheless funny. He also made public service announcements like telling us to turn back our clocks and to get our flu shots. After the second encore, Cuomo even told the audience to wash our hands with an antibacterial sanitizer.

I really like the material on Weezer's new CD "Ratitude." Therefore, I was a little annoyed when "(If You're Wondering If I Want You To) I Want You" was done with Leighton Meester as a duet. I like Leighton Meester. I've even watched her on Gossip Girl. She has a really good voice. BUT, since the song her and Rivers did was new, I would have preferred to hear just him do it. I understand special guest - blah, blah, blah but that's just my preference.

Besides Rivers Cuomo on mostly vocals and a little guitar, Weezer consisted of , Brain Bell on rhythm guitar, & backing vocals, Patrick Wilson on drums, and Scott Shriner on bass who at two points during the show did lead vocals. I've always known Weezer to be a 4 man band but there was a 5th man playing guitar next to Scott whos name I didn't get. So, if there is anyone in the blogosphere who knows - please leave a comment.

Weezer-live appeals to the Heavy Metal sensibility in their audience. Rivers Cuomo and the rest of Weezer for that matter prove that you don't have to be a wild haired, tattoo wearing hipster dude to rock. For me, that's the charm of Weezer's persona and their music.

Island In The Sun
Buddy Holly

To see great pictures of this show check out:
http://stereogum.com/archives/photo/weezer_hammerstein_ballroom_nyc_103109_098621.html