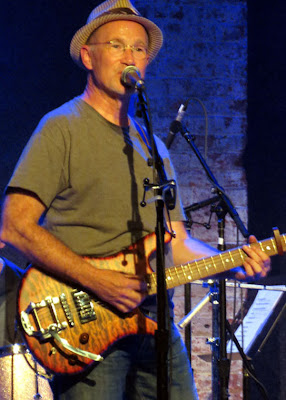 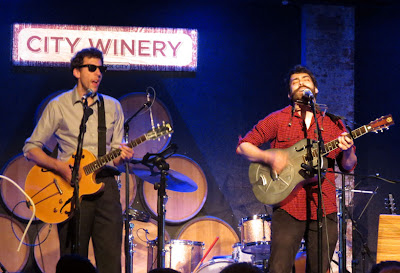 Thursday night was my first time at City Winery, as well as my first time seeing Marshall Crenshaw. Both firsts exceeded my expectations. In terms of sound and ambiance, City Winery, is a wonderful room to hear music. I didn't have any wine from City Winery's expansive list, but I did have the Wild Mushroom Crispy Risotto Balls which were delicious. There were other dishes on the menu such as pizza, which I would have most certainly tried if I was up for dinner but I was there for the show.


Prior to Thursday night, I was expecting a small place in Tribeca. However, City Winery takes up an entire corner of Varick street. Though the table seating is tight, the room is big. The table placement in the room is in the shape of a T, with the stage at the point where the horizontal and vertical lines connect. For those parts of the room where vision isn't directly facing the stage, there are TV and video projections of the performance. I sat a little off center about 30 feet away from the stage. So, from my perspective, the sound was pretty good. 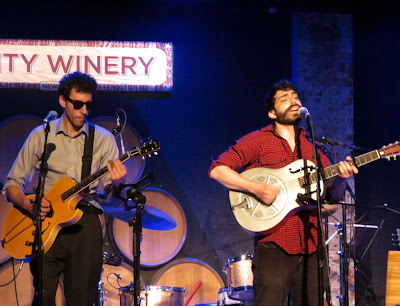 At about 5 after 8, the duo performing as Leland Sundries, began their set with a Dylanesque song titled “Maps of the West .“ At first, I thought “ut-oh, I wasn’t expecting this,” but that was a rush to judgment because I actually ended up really liking their set. I think my initial response was to Nick Loss-Eaton’s vocals which were very Leonard Cohen and Lou Reed. (I appreciate both guys, but can’t say I’m always in the mood for their speak/sing vocals.) 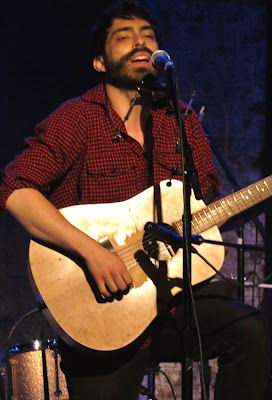 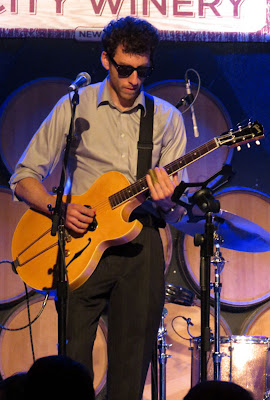 Eaton on acoustic guitar,vocals and occasionally harmonica was accompanied by the tall and lanky Jon Hildenstein who wore his trendy sunglasses for most of the set. Hildenstein played a beautiful slide guitar on the next song “Elegy,” while Eaton sang in a even lower register as he played on acoustic. Eaton said he wrote “Elegy” at a time when he was listening to a lot of Dylan. He then joked about it by saying “if you have any friends that say they’re listening to a lot of late period Dylan, you might wanna check in on them – see how they’re doin’.” 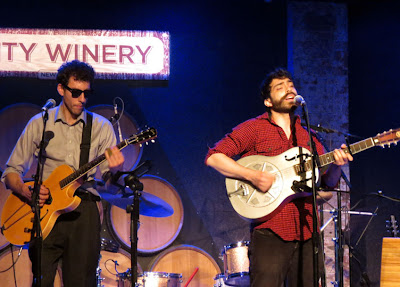 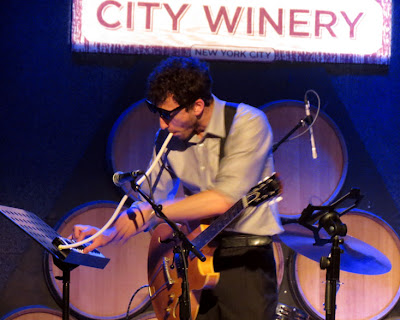 After doing “Oh My Sweet Cantankerous Baby” at a slow waltz tempo, Eaton said their next song was inspired by a guy who performed under the named Bone, in bar in Philadelphia called "Lickity Split." Bone performed a song dedicated to an x-girlfriend after giving out lyric sheets to the audience so they could sing along. The song’s chorus was “You Suck!” Eaton said whenever he thought of Bone it put a smile on his face. That setup, for the song “Apparition,” was the funniest part of the set. Eaton concluded the setup by stating, if you’re ever in Philadelphia, you can look up Bone, but then recanted and said “although I don’t know how you would look up Bone.” 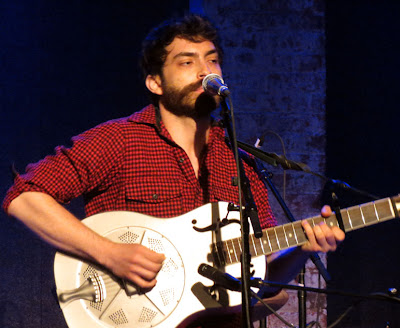 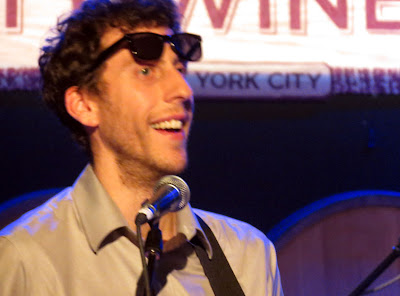 Leland Sundries finally picked up the tempo a bit with the song “Givin’ Up Redheads,” which I think is a great title because redheads are often the strange fruit that many sexually objectify. Before going directly into the song, Eaton asked the audience not to take the song too seriously. After the song Eaton and Hildenstein handed out clipboards, so people could sign their email list. They also handed out CD samples which they asked people to take. 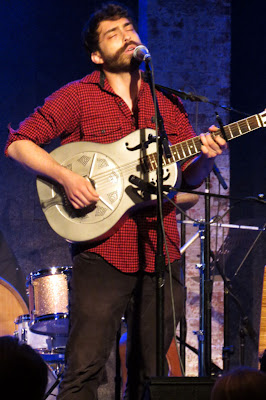 Leland Sundries did one more song in a ¾ tempo before ending with the newest and liveliest song of their set “Roller Derby Queen.” The song included an intro of Eaton speaking over Hildenstein playing a doo-whop blues progression before breaking into a very Chuck Berry like Rock song. By the end of the song, Eaton was singing through a bull-horn. (I tried to take a photo but he was moving too much.) 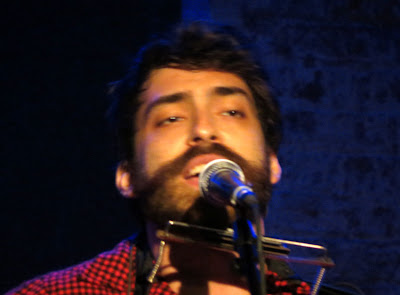 I was surprised but by the end of the set Leland Sundries won me over. They had good songs, made great music and I thought Nick Loss-Eaton was a pretty good showman. I’ve looked around online and found out that Leland Sundries sometimes performs as a band (with a drummer and bass player.) I hope to check them out again sometime in the future. 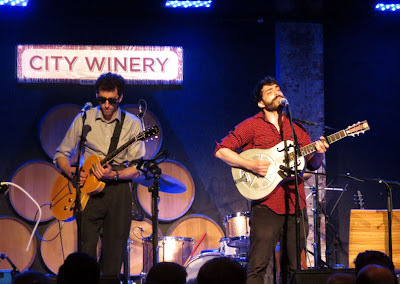 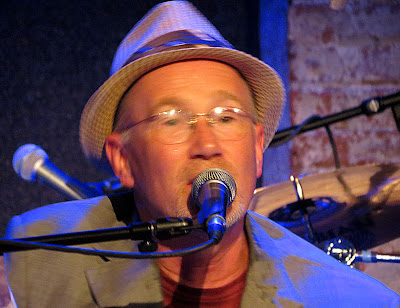 Marshall Crenshaw is an artist I remembered from the 80's for the song "Someday,Someway." I recalled before seeing Crenshaw that he was in the show Beatlemania and Robert Gordon having recorded "Someday, Someway," before Crenshaw released it himself. But other than those small bits of trivia, there was not much else I knew about him. And you know, I'm glad. Because when I saw Crenshaw on Thursday night, I loved every song he performed. His set was like seeing a really good movie I knew little about. There were so many great songs in Crenshaw's set that the song I knew him for was a bit of a let down. 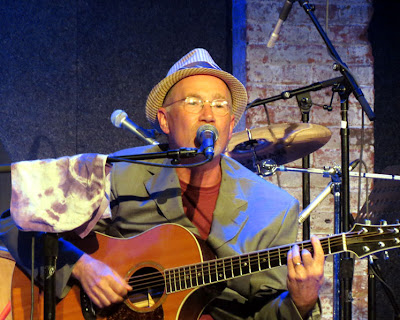 Crenshaw opened up the set with "Passing Through" from his most recent and 10th studio album (CD) Jaggedland. Before he started, Crenshaw stated that he and his band mates would be sitting for the first part of the show, and then standing up later on. Then as though he thought the audience had doubts, he added "I guarantee that we will." From the first song, all the way through to last, everything Crenshaw played was very melodic and had strong identifiable hooks. I automatically felt like that I wanted to sing along with each song and sometimes I did. 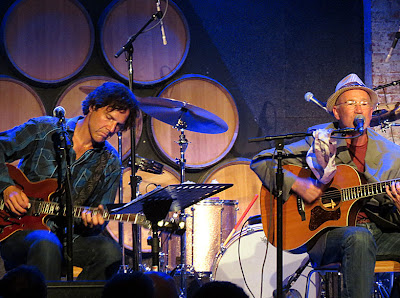 "You Should've Been There," was introduced as a song Crenshaw wrote with a guy named Leroy Preston and as a song he rarely plays in public. Proving his point, lead guitarist, Marc Ribler told Crenshaw he was starting in the wrong key as Crenshaw began to play on his acoustic. Crenshaw said "I'm glad you told me," and the audience laughed. One of the many beautiful things about Crenshaw's music are his harmonies which Ribler and bassist,Graham Maby supplied through out the show. 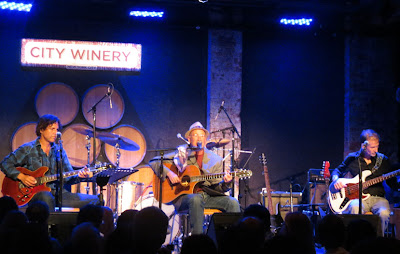 When Crenshaw explained how he wrote "What Do You Dream?" he made evident that he had some angry feelings towards a magazine writer who mistook the song to mean something other than what he intended. Afterward, Crenshaw introduced "You're My Favorite Waste of Time" as song that was used for a corn flake commercial in France and also as a song recorded by Bette Midler over 35 years ago. 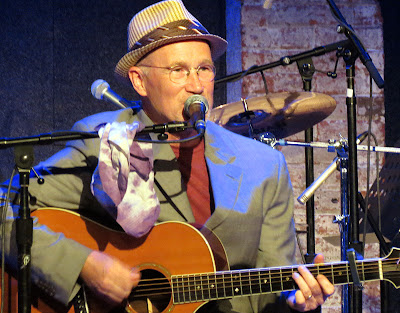 Crenshaw joked "Well fella's, you have one more of these sit down songs left... then we'll see if the drummer showed up yet." Someone yelled from the audience, "I'm right here" but I don't think it was Rich Pagano. The trio performed "Whenever You're On My Mind" which as far as I can tell was one of the outtakes from Marshall Crenshaw's first album. After the song, the boys disappeared and came back 5 minutes later with Pagano on drums. 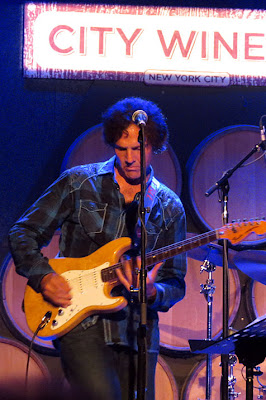 Crenshaw opened the second part of the set with "Television Light" from his album (CD) 447. The song felt like it could have been subtitled "What I did for you" because the line gets often repeated during the song.


As he was going into the next song, Crenshaw announced that he was about to embark on an "unorthodox recording project." He explained the project will be launching on July 26th, which is the next time he will be playing City Winery with The Bottle Rockets. He said he will be releasing a 4 song EP every four months and that "I Don't See You Laughing Now" is going to be the first A side. 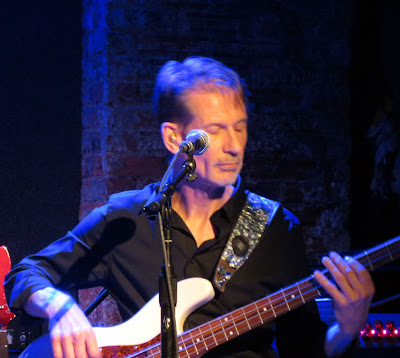 Crenshaw did two great covers, The first was a song written by George Clinton, which I absolutely loved. I listened to the original recording and found that Crenshaw stayed close to the original with the only differences being the original's Motown-ish backbeat and horn section. The second cover was pretty cool as well. It was by an artist I'm unfamiliar with named Richard Thompson. I checked out a video of Thompson playing the song solo on YouTube - he plays a pretty mean guitar. 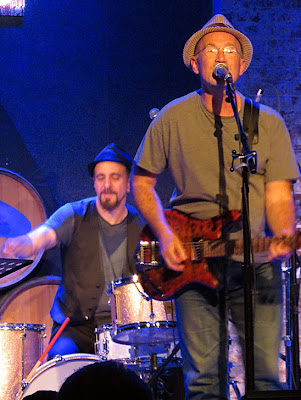 All through the show I kept thinking that Crenshaw lyrical phrasing and music reminded me of another artist. It was somewhere between Crenshaw playing "There She Goes Again" and "Live & Learn" that it dawned on me that the artist was Joe Jackson. Then Crenshaw went directly into "Cynical Girl" from the song before, and I no longer heard the comparison.


As the band was going into "Somethings Gonna Happen" someone in the band said "let's keep on rockin," and that is exactly what they did. By doing very little talking in between, Crenshaw and the band performed one song after another up until thanking the audience before the last song of the set, "You Better Back Off." 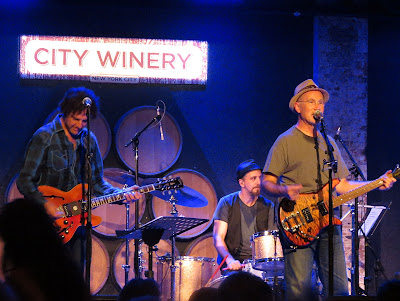 Marshall Cresnshaw and his band performed a wonderful arrangement of a song by The Move, a band that he claims only seven people ever heard of. Well, Marshall, make that eight. I used to listen to a DJ by the name of Alison Steele in the 70's and she used to play "Cherry Blossom Clinic" by The Move on her late night show. I never heard The Move do "No Time" but if it's anything like the way Crenshaw performed it, I definitely want to. With that said, if you are reading this and interested in a great night of music, check out Marshall Crenshaw with The Bottle Rockets on July 26th at The City Winery. 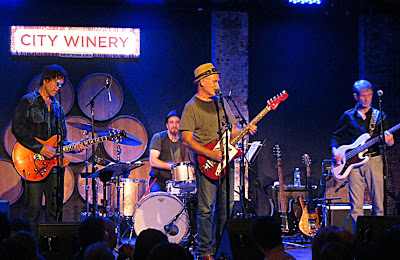 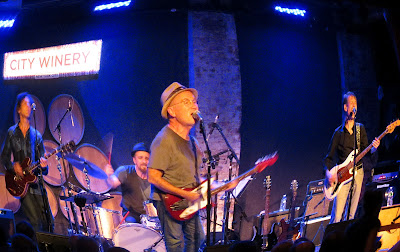 Email ThisBlogThis!Share to TwitterShare to FacebookShare to Pinterest
Labels: All Postings, Marshall Crenshaw with Leland Sundries