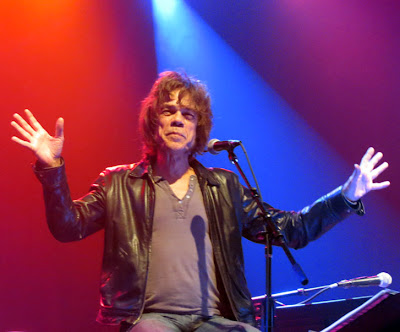 I guess Memorial Day Weekend was my time to see rockers over 60, starting with Willie Nile on Thursday and then David Johnasen on Saturday night. Since it was a holiday weekend I didn't want to check out Johansen's set by myself but all my friends had already made plans. In the end, it all worked out because I sat at a decent table next to the stage with 3 men who came to the show without their wives. 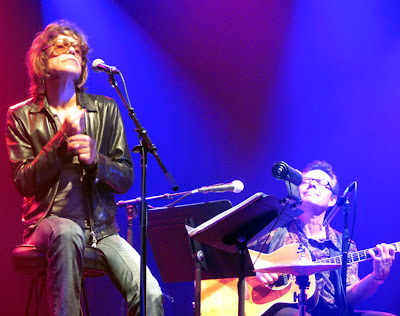 When the New York Dolls first album came out in 1973, I was in my sophomore year in highschool. Though I never got to see them, I had their album and knew about them from reading Circus and Creem magazines as well as Rolling Stone. I dug The Dolls but truthfully my two favorites at the time were Slade and David Bowie. I was a glam rock kid and wore red and brown platform saddle shoes to prove it. But with regard to The New York Dolls, except for "Pills" and "Personality Crisis," I didn't pay much attention to their music until the early 80's. 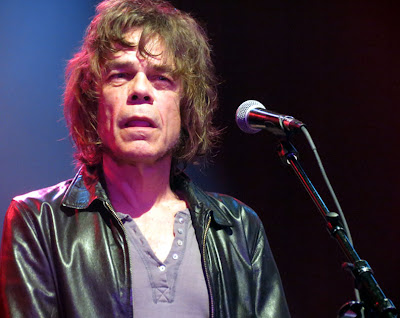 I did however get to see Buster Poindexter in the 90's, I know the place was in New York's Village but I can't remember where. However, I do remember that Poindexter aka Johansen did a few kickass blues songs and that he was quite the showman. What I learned on Saturday night is that he still is. 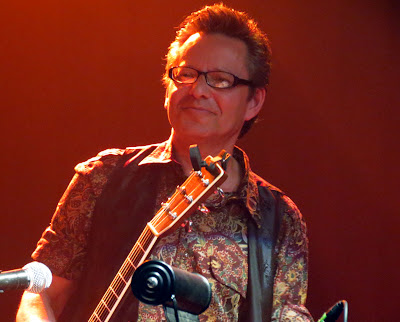 David Johansen and guitarist Brian Koonin walked out on stage, greeted the audience, sat down and went directly into "Funky But Chic." From the moment Koonin started playing I knew he was more than an excellent musician with some cool guitar licks, he was a virtual one man band of sorts. While Koonin played guitar during the first song, he peddled high hats with his right foot. Later, during another song, Koonin added a kick drum sound utilizing a pad under his left foot. 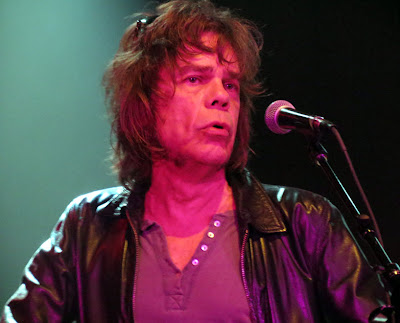 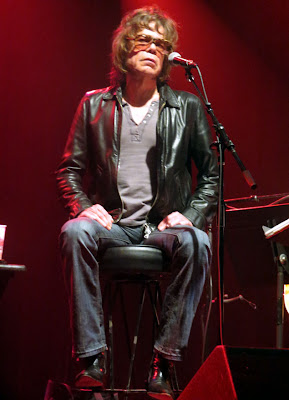 Like Mick Jagger and so many 60's and 70's artists, Johansen has a great feel for the blues. When he covered "Boom, Boom," Johansen played the lead guitar part on harmonica and figuratively threw away the lyric by speak/singing it very close to the original by John Lee Hooker.


Whenever I hear artists like Debra Harry or David Johansen speak - I'm able to laugh at my own New York accent. Johansen is from Staten Island, although with his accent he can be from anywhere in the 5 boroughs - six boroughs, excuse me, I forgot New Jersey. Johansen said "Me-ann - now I gotta whistle" before whistling the introduction melody to "Temptation to Exist." The song is from the 2009 New York Dolls' recording "Cause I Sez So." 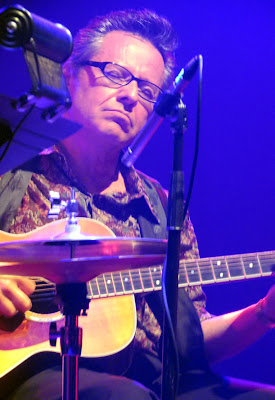 Johansen next did another blues, originally done by an artist known as George "Daddy Hotcakes" Montgomery. (You can see a video of Johansen doing the song taken by Paul Sheremeta at the bottom of this posting. Paul was one of the guys at my table.) Before I forget, I need to digress a moment to mention the white binder that Johansen walked on stage with. Johansen placed the binder, which contained his song lyrics, on a music stand in front him. I've seen Marianne Faithfull do the same thing, the difference being that Johansen didn't seem to need the binder; it seemed more like protection. He never dropped a lyric and I wasn't extremely conscious of the binder except when he flipped the page between songs. 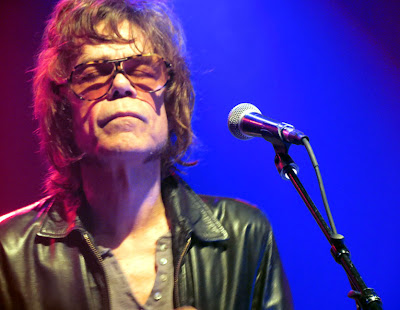 "From Death to Death" was announced by Johansen as a song he and Koonin wrote but he never stated the songs name. He mentioned that he had hopes that someone one else would record the song so he and Koonin could make a little money. Than he did what seemed to be the beginnings of an off the cuff, tongue and cheek monologue. He said "Of course money isn't everything. First you create the art with no thought of commerce....then...you give it as a gift to the teaming masses." Everyone in the audience chuckled including myself. I wanted him to continue but he went directly into the song. "From Death to Death" was actually very melancholy as was the another song the duo wrote and did later in the set titled "I Ain't Got Nothin." 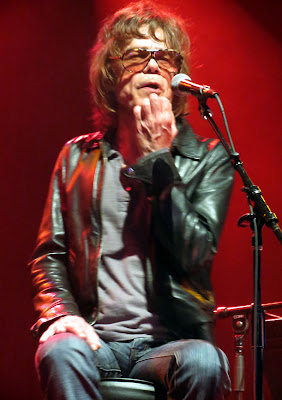 Johansen's setup for "Eight Men, Four Women" was even funnier than the last setup and completely appropriate for the song he was about to do. I listened to the arrangement by O.V.Wright which sounds very 60's soul while Johansen and Koonin's arrangement sounds like two old men sitting the front porch singing da' blues. Wright had a group of females doing background vocals, Johansen had Koonin. 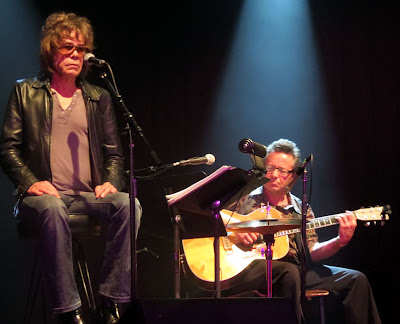 Johansen did one more uptempo blues song before asking the audience if they remembered when he was with The Harry Smiths. He then comically mentioned that he and The Harry Smiths did two albums together, with the song "Somebody Buy Me A Drink" being on one of them. I don't recall the Harry Smiths period. I must have been drinking heavily at the time 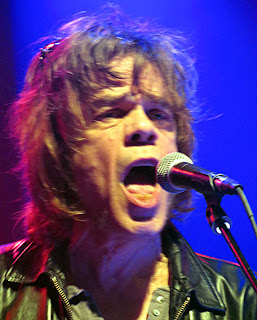 The most quotable line form Saturday night's show came before the song "Making Rain" and "Better By Than You." Johansen explained that The Dolls recorded at Todd Rundgren's house in Hawaii in January of 2009. Johansen described Rundgren's house as "so beautiful...it's a like a Cambodian's Drug Lord's Pagoda." The runner up quotable line came earlier when Johansen was talking about a bass player he worked with in England being "more Buddist than thou." 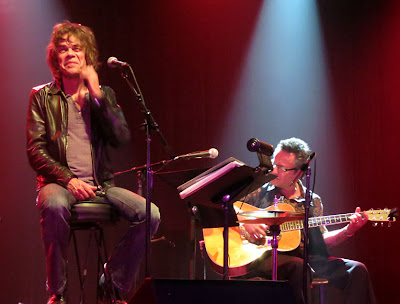 David Johansen was usually respectful about giving those songwriters who's songs he covered props stating who the writer was for each song. I guess his audience is accustomed to him doing so, because members often yelled out wanting to know who wrote a particular song when Johansen didn't mention it. However, for "South Coast" Johansen made a funny point of telling the audience not to ask him who wrote the song because he didn't know. 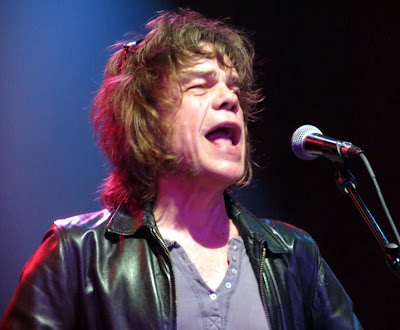 Johansen rocked out on harmonica for "Rocket 88," which he credited to Ike Turner. However from what I read about the song's true writer, of what is thought to be the first Rock and Roll song, is pretty vague. Once the song ended, Koonin went directly into another melancholy ballad titled "Maimed Happiness." Johansen made the audience laugh after the ballad by saying "that's the song they sing to you on your Birthday in Norway." 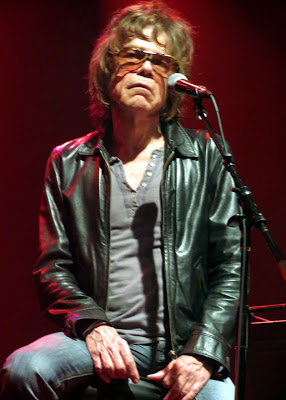 I couldn't help thinking as Johansen sang "Richland Women Blues" that the melody sounded extremely close to "Midnight Special." Not sure which came first - but does it matter? Johansen ended the set with "Pills" after doing "Dog Blue" and then "Big City" from his In Style album, which was my favorite song of the set.


Johansen and Koonin did an encore but never left the stage. The audience gave a well deserved standing ovation as the twosome stood stretching their arms out to acknowledge each other. Once they both sat down, Johansen's encore consisted of two more songs and additional comical patter ensuring that everyone in the audience left with a smile on their face. 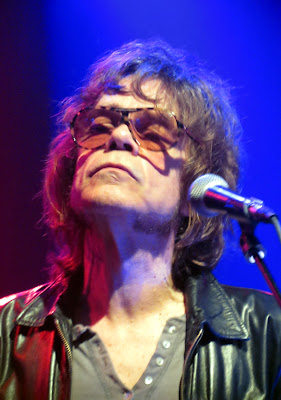 Email ThisBlogThis!Share to TwitterShare to FacebookShare to Pinterest
Labels: All Postings, David Johansen