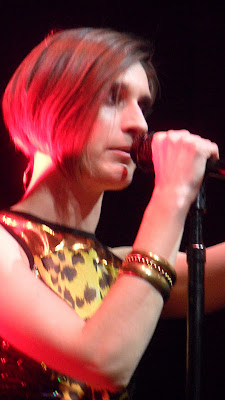 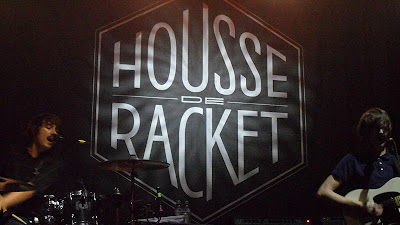 When I saw Phoenix in October of 2010, I loved the way they took over Madison Square Garden and made the space theirs.  I could tell that the band was really physc'd to be in NYC and that famous arena. 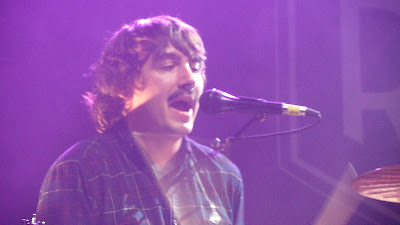 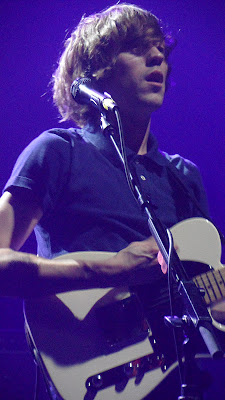 The two French bands I saw on Thursday night generated that same feeling of excitement. I could tell by the way Pierre Leroux, of opening band Housse De Racket, announced that it was the duo's first concert in New York as he looked over the sea of people. And I could tell by the way he and band mate Victor le Masne bowed at the end of their set. They were proud of themselves, and rightly so, they gave one hundred and ten percent. 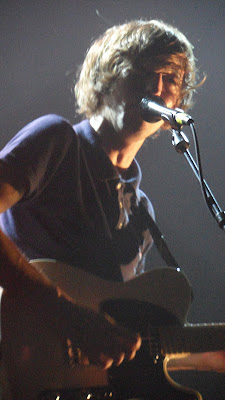 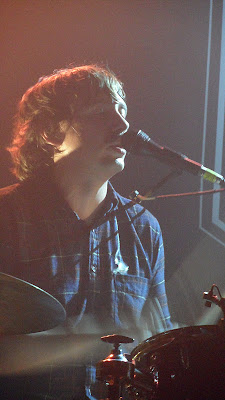 Housse De Racket did 8 songs in approximately 40 minutes starting with the first "Human Nature" which was completely in English. There were a lot of lights flashing as a sequenced organ patch played off their laptop and the two gentlemen took their places respectively behind the drum kit and guitar. The first thing I noticed was the ferociousness of Pierre Leroux's strumming once he started playing his guitar and how that first song had a sort of apocalyptic science fiction movie feeling that ran through it. 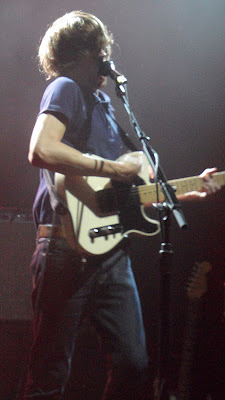 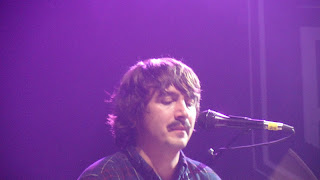 I didn't realize it when I was watching them but the second song was in English as well, except for the hook. The song, "Chateau" seems be about the rat race from what I can tell. There is a promotional video on YouTube of the song which is just okay but there's also an acoustic video of the song as well which shows what a really well written song it is. 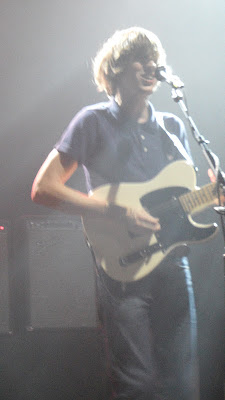 Leroux and le Masne had a little fun with the audience by asking first the girls and then the boys to scream out the name of their band. They did it twice and turned it into a competition which if I'm not mistaken the boys won. (I was just happy to be considered a boy again...at least for a hot New York minute!) The duo then accordingly played "Les Hommes Et Les Femmes."I liked hearing the song live but I have to admit it was a little repetitive. It sounded like a really good idea which could have been a little be more explored. 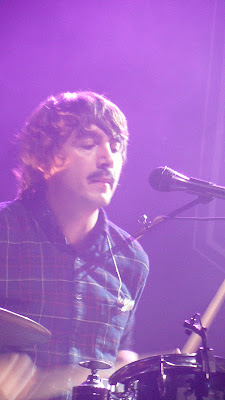 "Apolcalypso" began with Leroux clapping above his head prompting the audience to double clap to the calypso beat that le Masne was playing. "Synthétiseur," the song which followed, is my favorite on the duo's new CD Alésia. The song is part Survivor's "Eye of the Tiger" and part Daft Punk's "Harder, Better, Faster, Stronger." 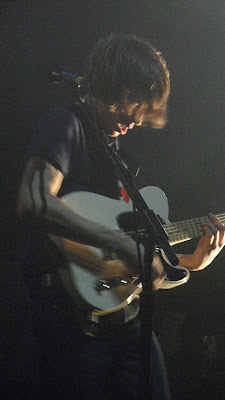 I was familiar with Housse De Racket's Forty Love CD when I saw the show. So, when they did "Oh Yeah," I was happy. I still don't know what the song's about but I think it's kind of funny the way it lists American artists like Stevie Wonder and Michael Jackson. 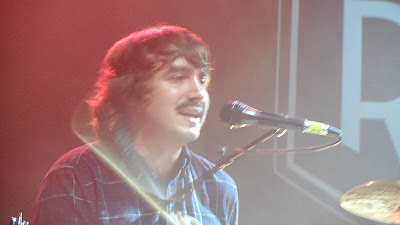 After doing the song "Roman" the boys ended with a rockin' instrumental called "Aquarium" Pierre Leroux worked along the edge of the stage and struck some rock-n-roll stances. When the song ended, Victor le Masne walked from behind the drums and both gentlemen bowed. It was a really cool set which assured that they acquired fans like myself who will definitely go see them again. 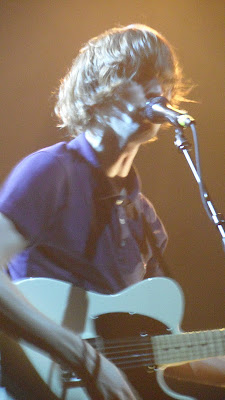 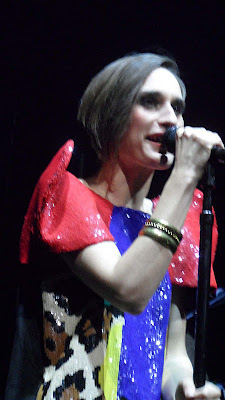 Starting from the moment that Yelle's two male musicians started playing on keyboards and drums with their visors on, Yelle gave the audience something to feel, see and enjoy for the next hour and a half. The audience cheered when spotlights lit the two musicians then cheered even louder when Julie Budet a.k.a Yelle walked out in her seaweed monster outfit. Toward the end of the song, Budet joined her band mates by playing the tom that was left for her in the middle of the stage. 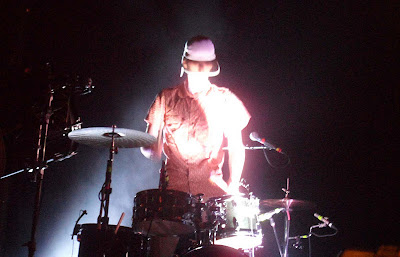 The next song was a cover of the Robyn song "Who's That Girl?"  It's the same song in French with a faster beat and a lighter sound - I actually think Yelle did a good job with the arrangement. Budet walked up stage as the song was beginning and took off her costume revealing a sequined dress with the face of a tiger on it that included red box-ie shoulders and a blue patch down the middle that was the tiger's nose. She was wearing skip sneakers on her feet and black leotards with fringes down the back (The fringes were a subtle touch that I might not have noticed had I not been close to the stage.) 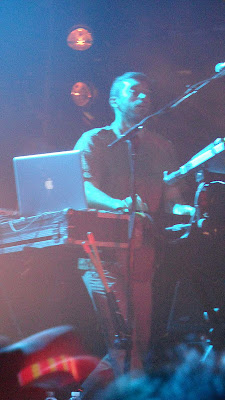 During "Unillusion" Julie Budet rapped sang most of the verses and glided around to both sides of the stage during choruses. When the musical breakdown simmered down to only a keyboard part, GrandMarnier walked out from behind his drum kit to the edge of the stage to clap along with the audience. As they used to say back in the day, the boy is fine!! Pale, French and extremely sexy...oui...oui.,oulala!!! 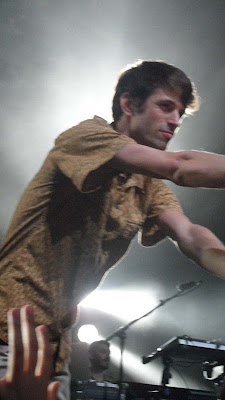 "J'ai Bu" featured Budet busting some of her freakier moves. At one point she held her hands like tiger claws as she prowled around the stage and then stood moving her arms in a circular motion starting from her shoulder sockets. The song was also the point when it became difficult to take pictures because the floor and everything around me was moving up and down. Yup the kids were dancing and singing along in French no less and they kept on doing so as Yelle went directly into "Comme un enfant." Jean-François Perrier a.k.a GrandMarnier once again came from behind his drum kit but this time he said "Nhew York I wont to ear you make a fock-ing awesome noise!!" (And then I really fell in love). 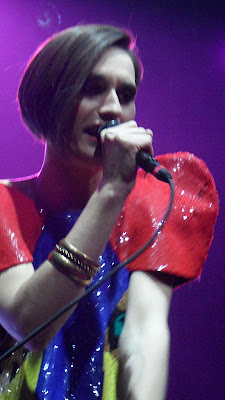 GrandMarnier asked the crowd if they could whistle for the song "Ce Jeu," everyone in the audience complied except this writer who ashamedly has never been able to whistle. But regardless of my inability to whistle, I love the bass synth patch that Tanguy Destable a.k.a Tepr plays during the song. It's the same sounding patch that Heaven 17 used for the song "Let Me Go." I'm not sure, but I think "Ce Jeu" was also the song that GrandMarnier, stood to the left of Budet,and snapped his fingers like a dancer in a scene from "West Side Story." 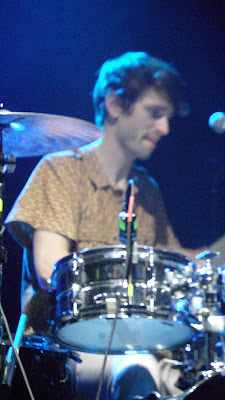 Budet had a costume change during the show into a tight fitting dress that was a mixture of leopard skin prints but I don't quite remember when the change happened.  I think the change might have been during the beginning of "La Musique," which was not my favorite song. 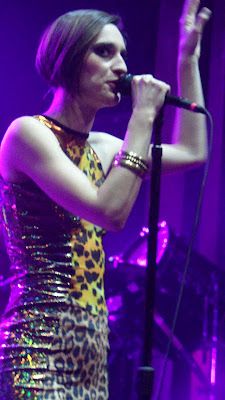 The entire audience seemed to be singing along with "Je Veux Te Voir." Since I was not so familiar with the song, I at first thought Budet was counting in French. But by the end of the song I realized she wasn't. Even though the lyric is sung as if she is counting, she's actually singing "I - Want - To - See." 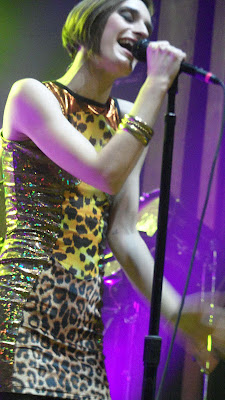 For me the most interesting song from the Safari Disco Club recording and in concert is/was "Mon Pays." I like the melody and I like it instrumentally. Oh yea, and Budet has her little moment playing the cowbell, as well as the privilege of ending with the song ac capella with just her vocal. 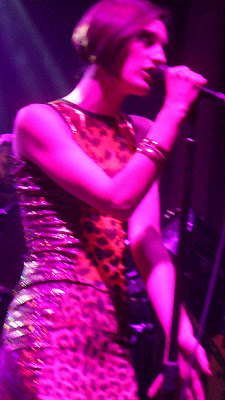 Until working on this posting, I had no idea that the song "Chimie Physique" is a cover of a song by Fortune. (Nor did I know that "À Cause Des Garçons" by a band having the same name as the song, was a cover as well.) Fortune's version is in English except for the title which sings better in French. Like with the Robyn song, Yelle does "Chimie Physique" faster than the original but more importantly still manages to make it their own. 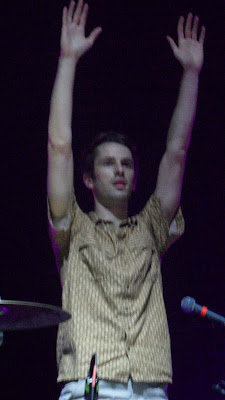 Yelle saved the best for last by ending with "Que Veux-Tu" and "Safari Disco Club." The lights were rolling, the audience was jumping and Budet danced around the stage. When it came time to end, the boys banged on the toms to the right of them and Budet yelled out "Merci beaucoup" before all three walked off. 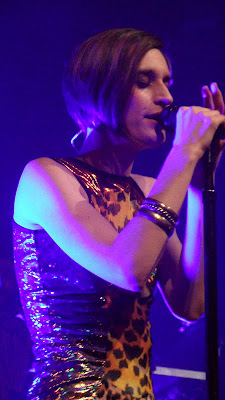 Yelle let the audience wait an appropriate amount of time for their encore, so it did not seem like a given. When they returned, GrandMarnier announced that they were going to do two more songs before ending the show which they did back to back. The funniest part of the encore was the ending. When other two members of Yelle walked center stage to take their bows, GrandMarnier jumped into the crowd to body surf. He body surfed all the way to the back of the room. Before walking off stage with Julie Budet, Tepr said something like "can you send GrandMarnier back - we need him." 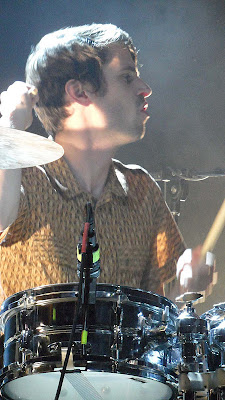 In order to get a full sound, there was a lot that was prerecorded during both bands sets. Prerecorded or preprogrammed parts are pretty much the norm nowadays. But I really didn't mind because I feel that both bands worked to put on a damn good show. A show that makes me want to see both bands every time the come to town.
Yelle Set List
S'éteint Le Soleil
Qui Est Cette Fille? (Robyn cover)
Unillusion
J'ai Bu
Comme Un Enfant
Ce Jeu
La Musique
Je Veux Te Voir
Mon pays
Chimie physique (Fortune cover)
Que Veux-Tu
Safari Disco Club 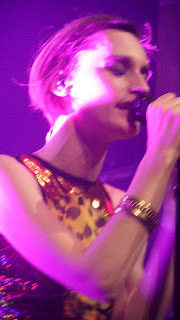