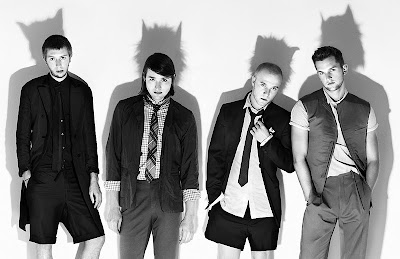 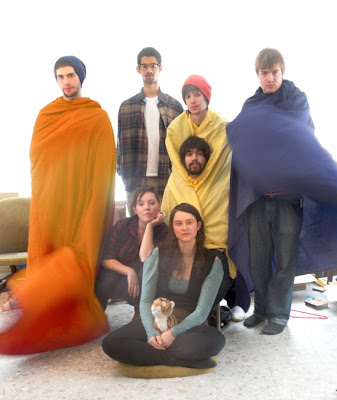 
Bobby is band out of Massachusetts which is defined as a cooperative project by Wikipedia. "Project" indicates that the existence of Bobby is temporary. It may also indicate that there is a goal or a final result but I don't know what that would be. "Cooperative" indicates that many people contribute by working on the project at different times. Referring to a band as a "Cooperative Project" seems like something out of Alvin Toffler's Future Shock. Realizing that the book was written in 1970, this must be the future he spoke of. 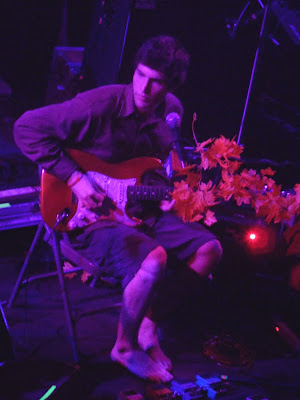 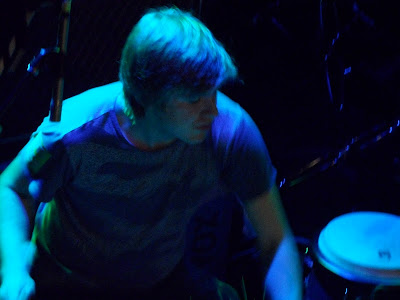 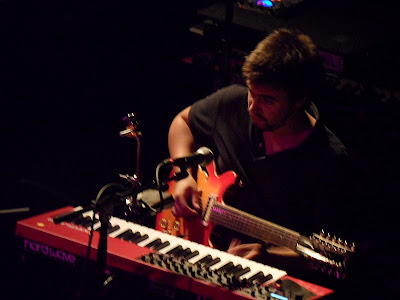 Bobby's debut CD features 7 musicians but there are currently only 4 musicians on tour. The two females members are on tour as part of Mountain Men and have been substituted by Maia Freidman. And two male members are MIA, not even their publicist knows where they are. (I should have asked if the FBI has been contacted.) I think it's safe to assume that the one constant is Tom Greenberg who formed Bobby and is referred to as their leader. 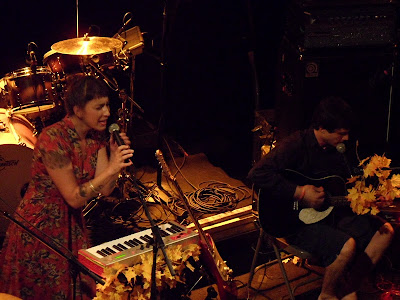 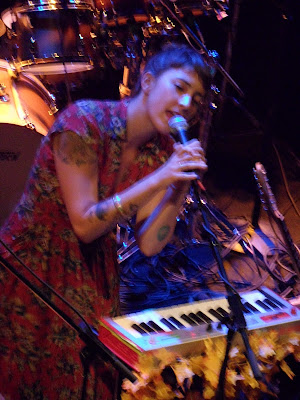 At times Bobby's sound is so organic that it may come off like a bunch of college musicians having a jam session. But after giving there music several listens before the show, I would say their sound is established through experimentation with different textures. As one person wrote on the NPR website, you can say Bobby's music is atmospheric and trippy. And in the same respect. I can compare them to them to bands like Rotary Connection or even The Cocteau Twins. But those bands had a specific sound or niche that Bobby hasn't yet found. 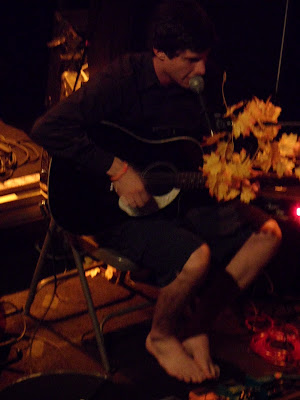 Bobby started off with "We Saw" which musically felt very meditative but lyrically sounded like it was making reference to a children's game of hide and seek. "Sore Spores" sounded more like an actual song, with an A & B section, as compared to the rest of their material. I loved the song's funny quirkiness, especially the weird outer-space synth sound against Greenberg's strumming on acoustic guitar. 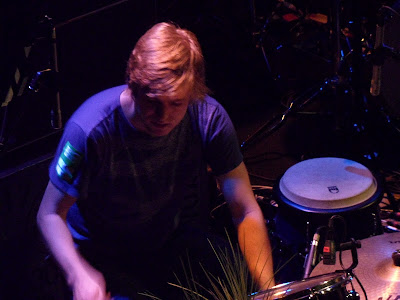 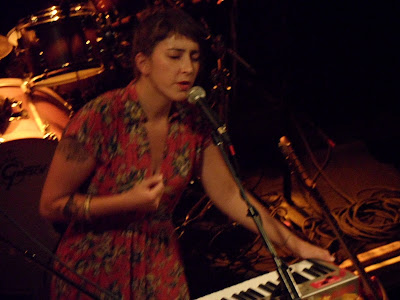 My favorite song on Bobby's album was also my favorite in concert but for different reasons. For "It's Dead Outside" Maia Friedman whistled into a mic, with a lot of reverb on it, during the latter part of the song. I find it interesting that parts tend to be added to and subtracted from songs, depending on the formation of the band. 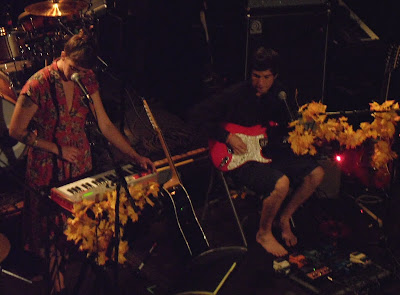 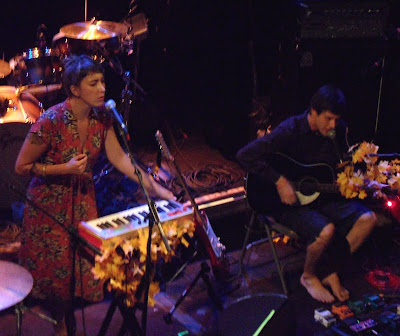 "ShimmyChick" had a sort of pseudo-psychedelic feel to it with it's weird organ and electric piano synth patches. I have grown to love the song "Ginger" with it's very strange mixture of sounds. "Ginger" opened with a harsh sound that continued through the song under the bands sweet soothing vocal harmonies and ended with a chant that sounded very Paula Cole. Funny - but whenever I hear that harsh opening sound, I think of an old TV commercial about pollution showing a big water pipe releasing dirty water into the Hudson. 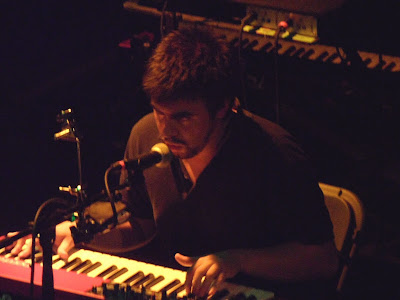 The band ended with a new song that they haven't named yet. The new song seemed livelier and rhythmically different than any of the songs that came before it. I think it is a testament to the fact that Bobby is a cooperative with a sound that is evolving. But for now, it's all good, the evolving part is what makes their sound so interesting. 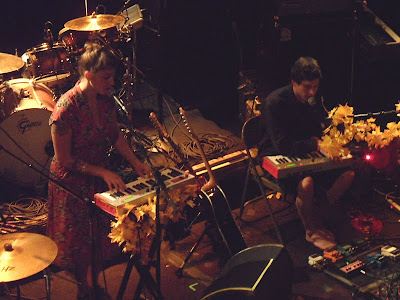 Julian Labat: bass, keyboards
Roby Moulton: keyboards, percussion
(These two are on the original recording but currently not on tour with Bobby) 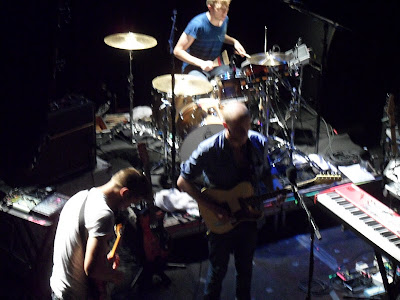 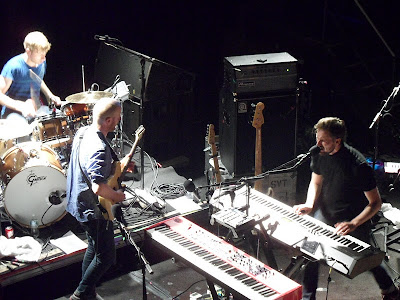 Friday was my second time seeing Wild Beasts. I was supposed to see them earlier this summer at Le Poisson Rouge but had to cancel because of having had back surgery. So to say the least, I was eager to see them a second time. However, though they performed really well, I was a little disappointed this time around. Two things, I don't feel the material on the new recording Smother is as strong as Two Dancers and secondly I found the band a little subdued. There was that one moment in the show when Tom Fleming did an impersonation for the audience. (Don't ask of whom - I don't remember - if you do, please leave a comment.) But for the most part, the band didn't seem to respond to an audience that was cheering them on 100%. 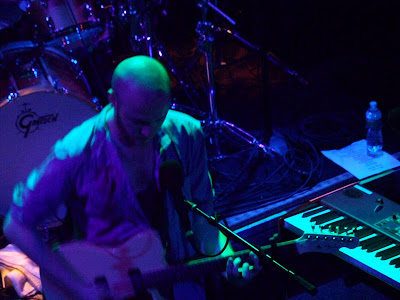 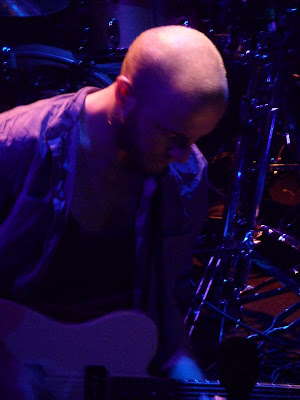 The set started as the band walked out to the trembling bass sound of "Lions Share," which doesn't seem like it would be a great opening song but was because the way it grew musically. It starts out with just Hayden Thorpe on vocal, with Fleming soon joining in on piano. It stayed in that bass, piano, vocal place for awhile until three quarters through when Katie Harkin joined drummer Chris Talbot on toms playing a sort of gallop through to the end of the song which was a sudden and complete stop. 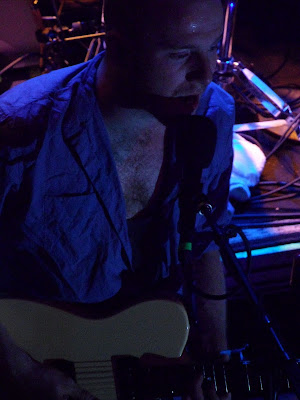 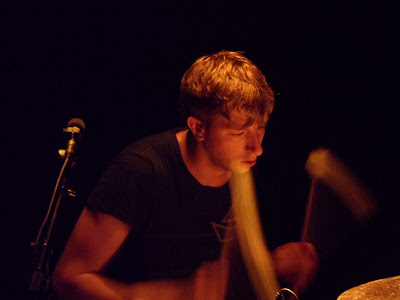 As Thorpe strapped on his Fender guitar, he said "So good to see you." The band went into "Loop The Loop," which I confess is one of the songs on the CD that has grown on me. I actually love that Talbot had a set of bongos as a part of his drum kit, the pattern he played was an integral part of the song. 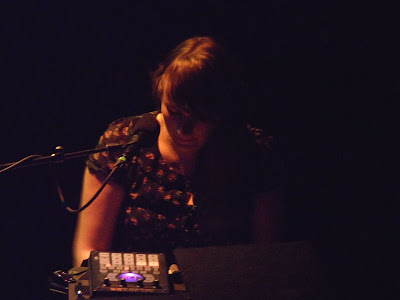 Wild Beasts did some of my favorites from Two Dancers which they pretty much handled the same as the last time I saw them so I won't repeat myself. They also only did one song from their first CD Limbo Panto, which was of course "The Devil's Crayon." During the show, I was reminded how much Fleming and Thorpe trade off with each other. Either one will play guitar, bass, keyboard or vocals; it all depends upon the song they are playing. 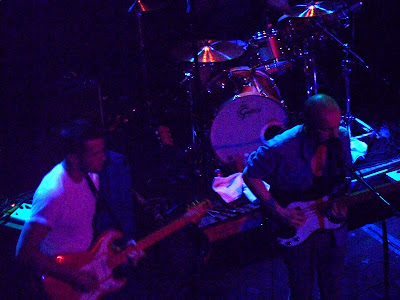 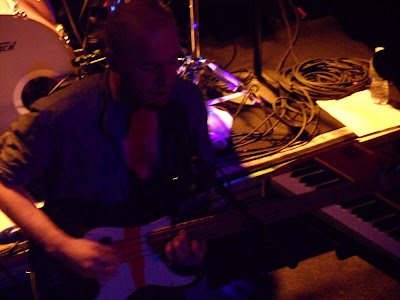 "Deeper," was my favorite song from the new CD, albeit the shortest song of their set. Whenever Fleming sang on Friday night, I remembered how much I love the soulfulness of his vocals. There is something very warm about the resonance of his voice and his vibrato. Funny thing about "Deeper" is the Talbot's drum beat plays such a prominent part that I didn't pick up on listening to the bass line until I actually saw a bass in Thorpe's hands. 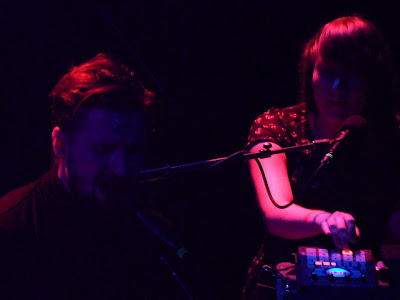 Ben Little used a bow to play his guitar at points during "Bed Of Nails," which probably is the most accessible song on the new recording. My favorite part of the song is the musical break (release) when both Thorpe and Flemming are singing Ahh's over the music. 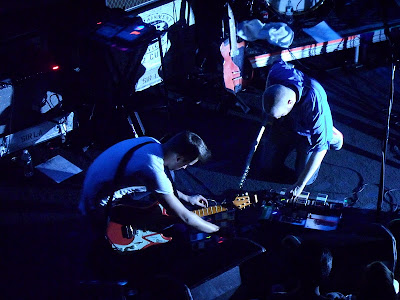 Wild Beasts sensibly ended with "Hooting & Howling" and returned for an encore with "All the Kings Men." However, they left the most interesting part of the set for last with "End Come Too Soon." Fleming and Little worked off of each other's guitar to create a foundation for which the whole song was built on. The song eventually segued when both guitarists were on the floor fiddling with their guitar pedals creating a sounds which spiraled and swirled, before eventually coming back into tempo and ending the song. 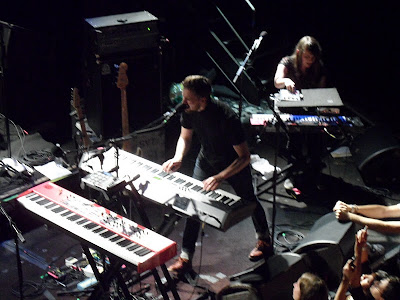 So yes, the show had a dramatic beginning and ending, it came full circle. Hmmmm, maybe Wild Beasts' set on Friday night was better than I thought it was or just as good as the first time I saw them. Okay, forget how I began this posting - I've changed my mind. You can bet I will be there when they tour for album number four.