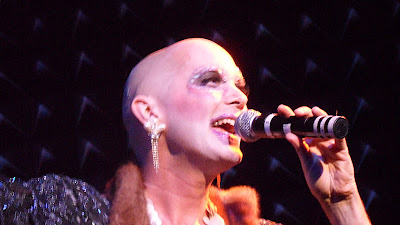 When I first heard that Taylor Mac's second performance at Joe's Pub was billed as a 1930's show, I thought it would be filled with obscure songs.  I don't know why I thought that because it doesn't really make sense. Especially, since his shows at Joe's Pub are to workshop the history of popular music, emphasis on pop. 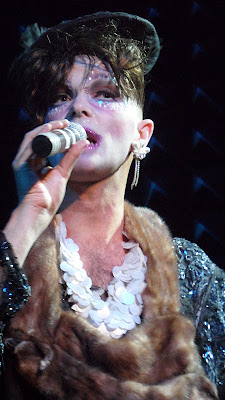 In a lot of ways Mac's 30's show was a lot wilder than his 70's show, we even got a full frontal of his phlacid manliness in both its tucked and untucked positions.  (No - I did not take a photograph, so don't write me asking for one.  There are moments that are better experienced than photographed.) 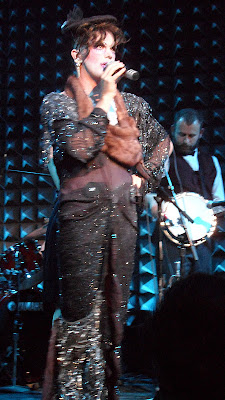 The show started with the band on stage playing a smokey sounding "Minnie The Moocher." As Jon Schatz played the song's sultry theme on muted horn, Taylor Mac slowly walked out in his 30's evening gown that appeared to be made of black brocaded glittering fabirc. Mac wore dangling pearl earings, a necklace of white shells, a fox fur across his shoulders and hat atop his usual red wig. The oufit was put together by Machine Dazzle, who Taylor Mac refers to in his promotional emails as "designing his shame." 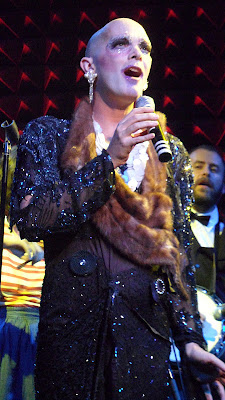 Mac sang "Moocher" with a sort of nassle growl as if he were channeling Eartha Kitt on crack.  Before talking about the show, Mac ranted about how he always managed to be on time but all the other performers in New York were on drag time.  After requesting that the lights be brought down on a certain part of the audience, Mac explained that he was working on a 24 hour concert on the history of popular music. Then said "don't worry - not tonight."  He then explained as he did during the prior show about his quest for inperfection and the topography of a voice. 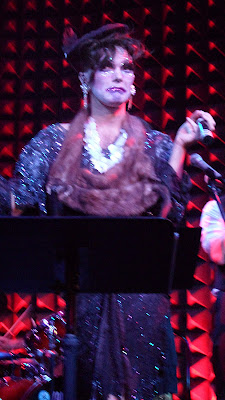 Mac did quite a lot of standup during his 30's show performance with a varied amount of topics starting with his bit about how straight white men talk to each other. I won't give away how the bit evolved but I will just say it was followed up by the "The Dipsy Doodle."  During the song Mac walked into the audience for the first of many times during the show. 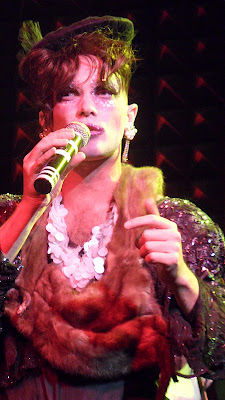 Mac went directly into the next song "Paper Moon" but this time he did his standup during the song as the band simmered down behind him. The bit was centered around straight girls, drag and a batcholer party. Before his next song Taylor Mac said he wasn't going to do "Over The Rainbow," but was going to sing another over used caberat song which he originally heard the drag queen Pussy Torrett sing. He kicked off the song by saying - "This is for Pussy!!" 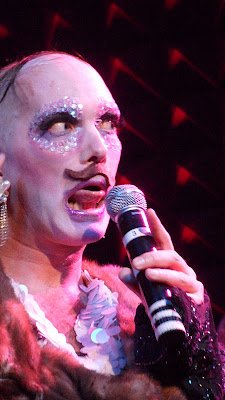 "If I Can't Sell It, I'll Sit On It" was the lead into patter about how lyrics in the 30's were more about sexual innuendo. But before the ending the song, Mac repremanded some guy in the audience for eating during his performance, then Mac grabbed the guy's phone and texted his mother. On the topic of innuendo, Mac talked about how they had "the code" in the 30s vs modern times where everything is so blatant. 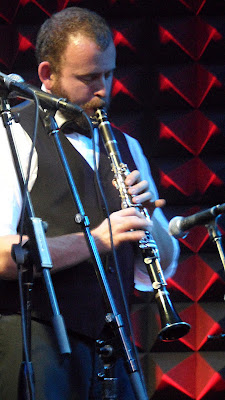 Mac somehow sequed into the "The Peanut Vendor" medley (which was kind of sort of a medley but not really) by first talking about the sterotypical gay waiter who used blantant innuendo for everything. Mac did the medley as someone named Camador Stockton. To get into a character Mac took off his wig and had wisps of hair attached to the top of his head imitating a balding man's comb over. He then taped on a fake mustache. 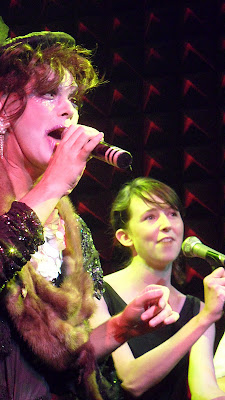 After wagging his 3 piece set during the beginning of "The Peanut Vendor," Mac walked into the audience and asked the house to bring the lights down and as he put it "so we can do things." He then sang off mic and danced with an audience member while singing "Dancing in the Dark" and "Some Day My Prince Will Come." There were quite of few funny things that happened before and after Mac got back on stage and returned to the "Peanut" song but I'm trying to give the highlights of the show without being a spoiler. 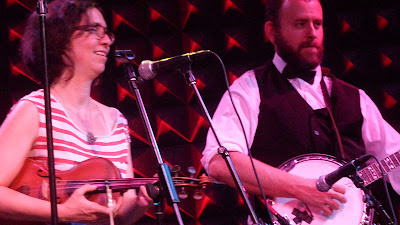 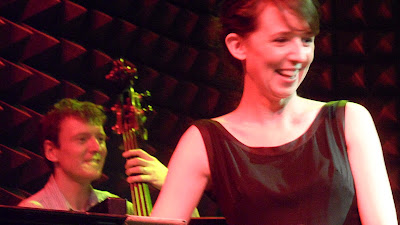 Mac did more standup ranting about a downtown New York club which turned into a talk about boundaries during the song "Anything Goes." Mac brought out Sarah Gancher to join the rest of the band on the song "Tea for Two." It occured to me at that point that Mac stayed pretty true to the 1930s by doing the opening verses to many of the songs. During "Tea" Mac did some standup about his love/hate relationship to peoples babies and how they are the reason for our current economic crisis. 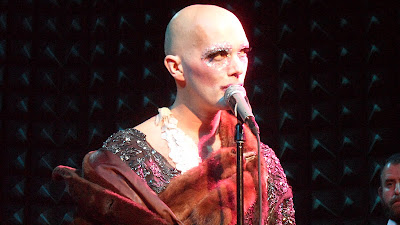 "River Stay Away From My Door " was a song I didn't know but it was my favorite song of the evening. The song had a very sweet bridge section which Mac sang before asking the band and then audience members what was the most pathetic thing they ever did for money. The stories and Mac's responses to them were pretty funny. Mac walked into the audience and asked who wanted to tell their story. It was really funny when Mac denied someone the opportunity to tell their story. Mac asked that person "Honey, are you an actor?" I didn't hear the response but Mac then said "cause ya want it too bad!" 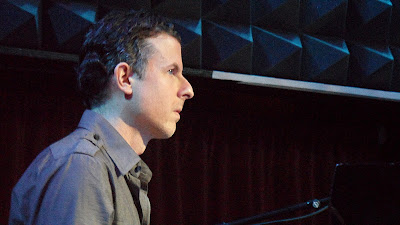 Before singing "Brother, Can You Spare a Dime" Mac seemed to go off on a tangent about there being 6 tiers of comedy by describing comedians from the higher to lower echelon. When he got to the lowest tier he basically incorporated the Occupy Wall Street protests by saying that he rather be with the 99%. Without giving away many of the funny parts, I will say that the entire explanation was quite entertaining. 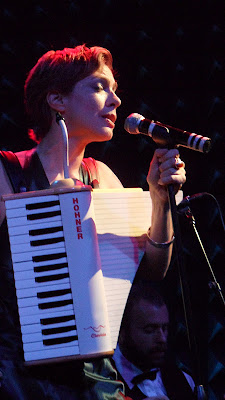 Mac mentioned that during his 24 hour show dedicated to the history of pop music, he is going to need pee breaks. Therefore, he said he will be inviting some of his friends as guest performers and with that said invited Michele Garniez to the stage. Mac said that Garniez would be doing one of her own songs that was influenced by music from the 30s and in line with the evenings theme. 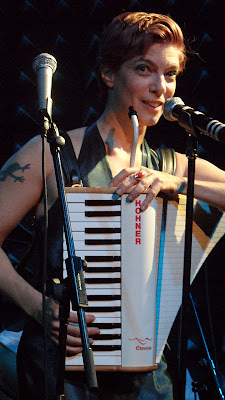 Garniez spoke a little about plastic surgery and advances in the field of rhinoplastie before doing the song "Broken Nose." Garniez' vocal reminded me of Rickie Lee Jones but that might have just been by virtue of the type of song she was singing. During the song's musical break, Garniez played something called a claviola which is blown into like a melodica and has keys like an accordion. 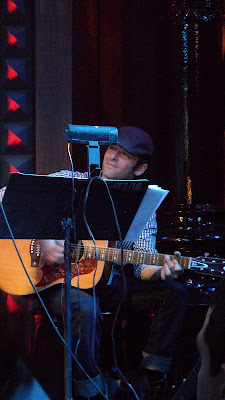 After Garniez performance, Mac mentioned that there were lots of country songs from the 30s before doing one. Mac did the "Mule Skinner Blues" at twice the speed but I really enjoyed Mac's rendition over the original - it had bite. The delivery in a way was almost punk and I can attest to that fact after hearing, a country punk band, The Legendary Shack Shakers, the night before. 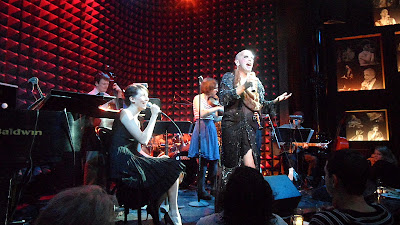 Mac ended with "The Music Goes Round And Round," using it as a great opportunity to introduce the band and have them each solo. Mac said goodnight after the song, then walked off stage and returned for the encore. The encore was "All of Me;" it was sweet, gory and unforgettably funny, all at the same time, but in case Mac does it again for his 24 hour concert I'm not going to give it away. Besides if you haven't seen Taylor Mac you might now have an excuse.
Set List
Encore:
16. All of Me - Gerald Marks and Seymour Simons


Video of "Minnie The Moocher" taken by Mark Horn.