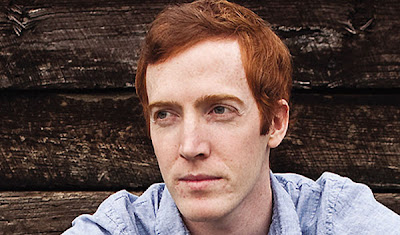 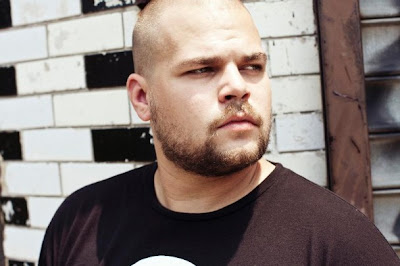 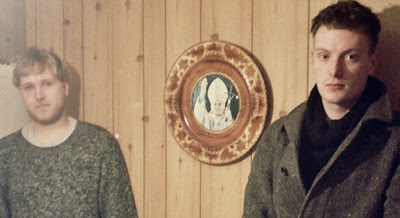 Saturday, I went to see three artists I knew very little about. For this blog, I pretty much go to see shows because I'm familiar with the headlining artist or propelled by instinct after having seen a band's name several times. Such is the case with Active Child. Having passed up Active Child's name with Pat Grossi's head shot several times, I became a bit intrigued. So off I went to Bowery Ballroom to catch an entire show.

The evening began when I arrived outside the Bowery Ballroom and saw people waiting to get in . There was a very sweet couple (guy and girl) taking pictures with Pat Grossi. He then walked inside, and I spoke to the couple who were tweeting the photos they had just taken. Grossi later came back out again to go to dinner as the Bowery Ballroom officially opened allowing the concert goers to go downstairs and wait for the main room to open. 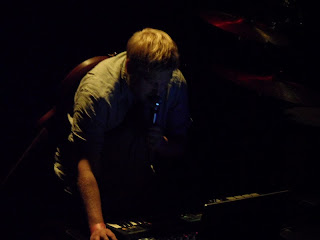 Young Athletes League is a project out of Oxfordshire belonging to Pierre Vaux who collobrates regularly for improvisions and visual work with Harry Sanderson. I wrote Vaux through his MYSPACE page because I originally thought Young Athletes League was a duo. Vaux stated that Sanderson needed to devote more time to his work as an artist. Vaux sees his London shows including Sanderson as sometimes jam based, unlike his shows in the US where he works just as a solo artist. 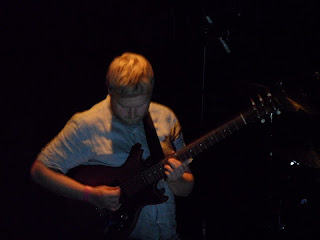 Pierre Vaux's music as Young Athletes League can be classified as house. I would say it leans more on the hauntingly modal and darker side of house music. Vaux stood center stage at a table which held a laptop, a keyboard controller, a mic and maybe a sampler. (I couldn't see what the small thing was to the left of his keyboard). Vaux used a lot of kick (I don't remember hearing any snare) to underpin his rhythmically looped samples over computerized synth pads. Vaux's often repetative vocals were run through effects like vocoder or maybe even auto-tune, then looped to become part of the musical sound collage. For two of his songs, Vaux played guitar which he looped as well. 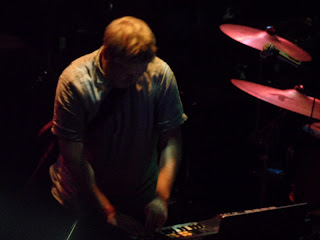 The most obviouse thing I picked up on was that there seemed to be a certain punk sensibility about Vaux's music. It was something in the way that Vaux ran sounds together that sometimes seemed a bit more calculatingly haphazard than hypnotic. Since I was hearing Young Athletes League for the first time, I wasn't familiar with the song titles but I think it was the song "Monaco Sunglasses," or a similar song to it, which had a vocal that acutely reminded me of Gang of Four's Entertainment Album. 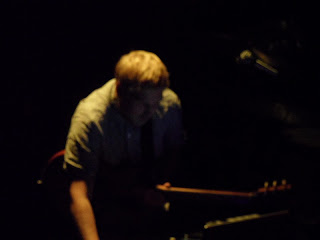 I enjoyed Young Athletes League but, I have to state, I was annoyed that the stage was kept so fucking dark for most of their set. My feeling is, if your going put someone on stage throw some light on him, if not than put him in the sound booth! 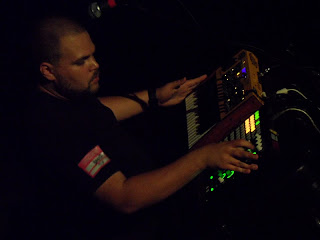 Com Truise is a spoonerism and the pseudonym for electronic musician Seth Haley. If you think that's funny, than you probably will think the twitter name for accompanying drummer Rory O'Connor is hysterical. I was told by Truise's agent that it's "musicfarts." But I digress, according to his Last FM bio, "Com Truise is the maker of an experimental and bottom heavy style he calls “mid-fi synth-wave, slow-motion funk." 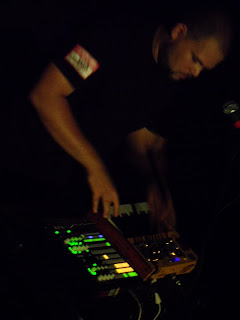 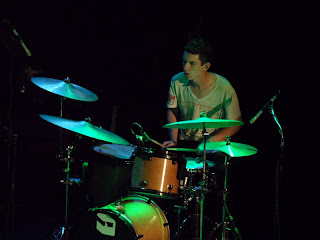 Although Truise's set did not include any of his vocals, it did have spoken verbal snippets here and there which were often hard to decipher. As I recall, Truise's songs like "Futureworld" seemed to take the audience on what seemed like journey through a cacophony of synthetic sound patterns woven into a heavy bass groove through different sections of the song. 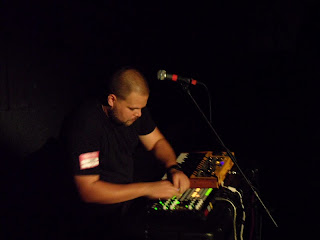 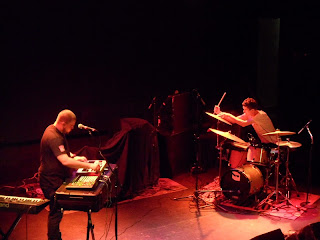 Com Truise kept me listening through his 8 song set with a diverse set of song choices. There was the song "Slow Peels" which had a reggae feel and other songs which had similar feels to songs by New Order or Depeche Mode. There was also a song, with lush keyboard sounds and an erratic quality in both Truise's and O'Connor's playing, that almost felt like jazz. 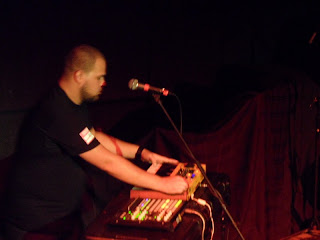 Somewhere around the 5th song of Truise's set, there were people throwing a whole bunch of glow sticks into the audience. Many audience members were twirling the glow sticks and dancing along to Com Truise's music. Since I was hearing Com Truise for the first time, there was a lot to take in but it was all enjoyable and kept my head bopping along through his set. I wanted a glow stick too dammit!
Active Child 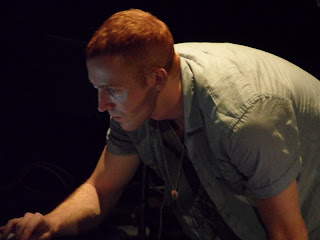 Pat Grossi AKA Active Child seems to be an artist who is slowly growing in popularity and deservingly so. He is a unique artist with a unique sound. I mean, think about it, how many solo artists do you know that are over six feet tall, sing in falsetto and play harp in a semi-electronic trio? I would say unique is an under statement. 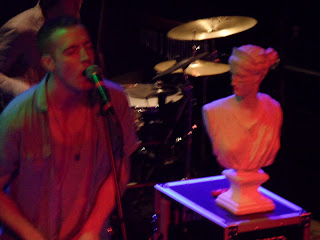 I couldn't help but notice that all three musicians had Apple Laptops beside them on stage and that both Pat Grossi and bass player Stratton Easter both used M-Audio keyboard controllers at different points during the show. 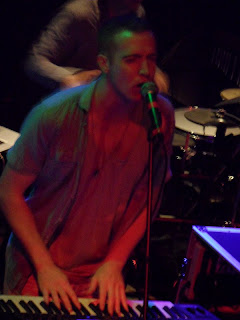 Grossi started the show with a small intro during which he sang in his high falsetto voice as drummer Brennan Rhodes used mallets on his high hats and then his toms to get an explosive sound. As Rhodes continued his drumming which almost sounded tribal, Grossi played harp and sang "High Priestess." I think Grossi was controlling a chorus on his voice and a pad sound that went along with it through the gear he kept fiddling with between playing his harp and singing during the song. Whatever Grossi was doing to his vocals, it gave them a slight nuance by adding a little bottom and fullness. 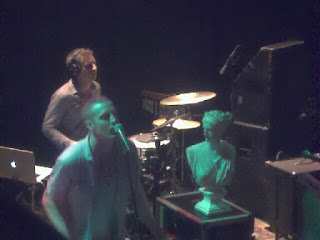 I found "Shield and Sword" pretty intense with it's dramatic stop in the middle of the song and bass line against percussion sounds that reminded me of the band Little Dragon. After the song, Grossi gave a shout out to his Dad who was in the audience. He then announced that most songs were from his debut CD which was released two weeks ago. Yet, I found it odd that he did 9 out of the 10 songs from his CD, with the 10th being the exclusion of the title track "You Are All I See." Grossi excluded the same song when he played the First Unitarian Side Chapel in Philadelphia two days before. 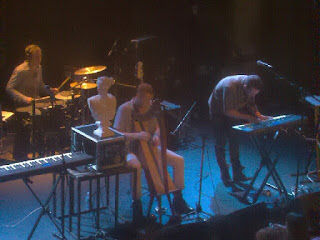 My favorite three songs came in a row, They were "Hanging On," "Way Too Fast" and "Playing House." I found all three songs really memorable in a pop sort of way with the last song being amazingly soulful. And even though they are two completely different songs, there was something in the beat and especially in the vocals for "Playing House" that reminded me of Dirty Projectors' "Stillness Is The Move." (Call me crazy - go ahead!! I will still feel there is a worthwhile comparison.) 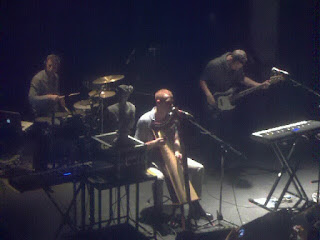 Grossi played keyboard on the next two songs from his 2010 EP Curtis Lane.  Both songs felt slightly different in feel than the songs on the new CD.   "Take Shelter" felt like it had a bit of dance quality to it with it's driving bass line and "When Your Love is Safe" had a very straight forward 80's feel to it.  Grossi stayed on keyboard for "See Thru Eye," but musically it felt like the trio came back after a departure from the newer material. 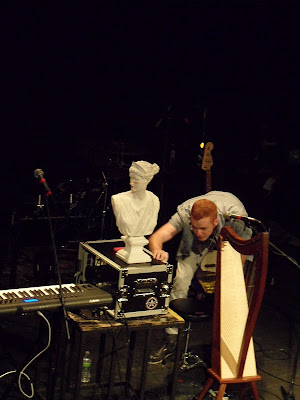 On Active Child's recording and in concert the opening organ chords to "Ancient Eye" seem monumental, especially when the harp comes in over the second chord. In my minds eye, the song seems like it can be the soundtrack to accelerated film footage of a lunar eclipse. (Okay I'm gonna show my age now - get ready.) There is also something in the vocal harmonies when the melody climbs up a minor 3rd that sounds like something from the band Yes (I'm thinking "Fragile" and "Close to The Edge.") 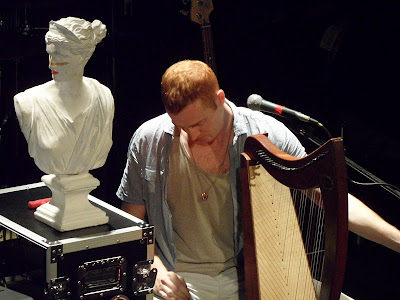 Active Child ended with "Johnny Belinda," then came back for an encore with "I'm In Your Church At Night" and "Ivy." I'm not sure I really ever got the song "I'm In Your Church at Night." I read that Grossi wrote the song about an abandoned cathedral he and friends sneaked into in Italy.  Yet, I have no idea what the video's about and aside from the triangle in the circle graphic, I'm not intrigued enough to find out. 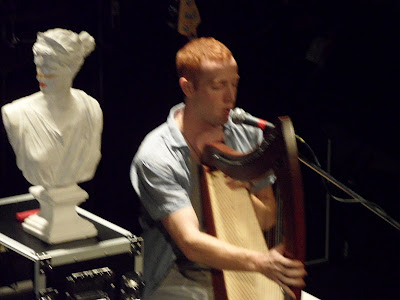 I really enjoyed that Active Child ended their set with an instrumental ("Ivy"), it kind gave their set a finality, like a epilogue to a really good book. All and all it was a great show. 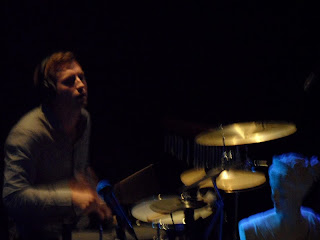 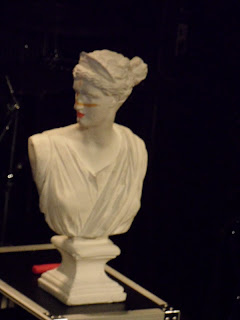