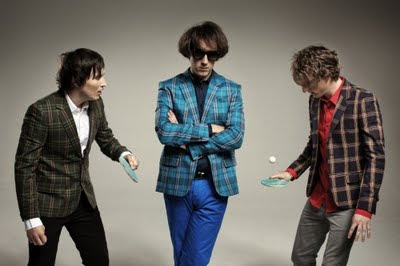 Since starting this blog, I usually check The Bowery Presents online calendar on a daily basis. Sometimes I check the calendar three and four times within the same day.  I thought it was odd that The Wombats were originally the only band listed on the bill for Tuesday night.  But surprisingly that changed sometime Tuesday morning when the calendar showed the addition of Wild Party. Not surprisingly once the line up changed, so did the showtimes. The showtimes changed twice from the scheduled show starting time of 8:00 to 8:30 to the actual time of 9:00.
I got the Bowery Ballroom at 7:15, thinking that I was early but there was already a line to the main room doors in the downstairs lounge.  Once the doors opened, I was still able to get a place in the balcony but not the seat I wanted.  Oh well, no biggy, I sat at a table, tested my camera and waited for my friend Jegan while Foo Fighters CD "Wasting Light" was being played over the sound system for the first half hour. 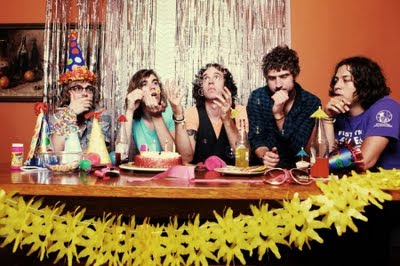 Wild Party started their set at exactly 9PM with "Connect The Dots".  I can't say that I am familiar with their music because as of right now they only have two songs released.  But I will say that the band was tight and I got the sense that their set was planned with beginning, middle and end. In other words, Wild Party didn't get on stage to haphazardly do seven songs; their set was thought out to leave a good impression on the audience. 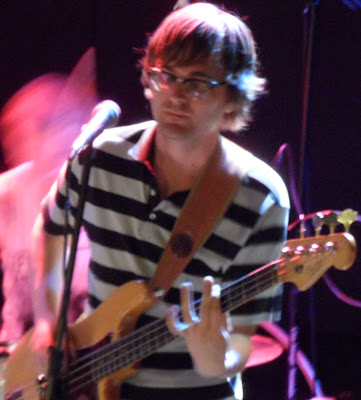 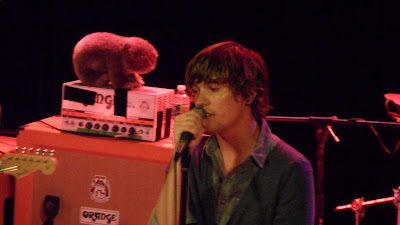 Wild Party's bio references The Killers and The Strokes for musical comparison.  I hear The Strokes and perhaps bands like Jane's Addiction.  Like Julian Casablancas, Lincoln Kreifels' vocals have a naturally melodic yet spoken quality, though not as low and growly or as pitchy.  There's no getting around the timbre of Kreifels voice at times sounding like Perry Farrell especially when I heard him concert. 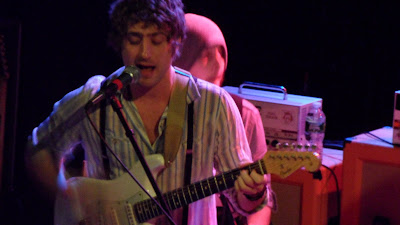 Wild Party zoomed through their set as if they had a plane to catch.  However, the audience was up for good time and for the most part seemed to enjoy them.  Before singing "Life's Too Short" Lincoln Kreifels said "We got a few more songs for ya, then you can see your beloved Wombats." He might of been joking but it came off a little snotty. 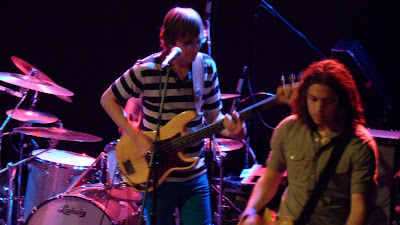 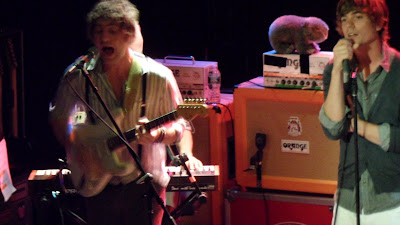 As Wild Party went through their set, I began to like each new song better than the one before.  The last two songs of their set were my favorites.   I may not remember how the song "When I Get Older" went but I do remember groovin' to it.  As for "Take My Advice" you can hear what I mean by Lincoln Kreifels sounding like Perry Ferrell,  for yourself, on their myspace page  http://www.myspace.com/wearewildparty. Wild Party dramatically ended the song and their set by each walking off stage as drummer Jared Shotwell played a 4/4 backbeat before leaving himself. 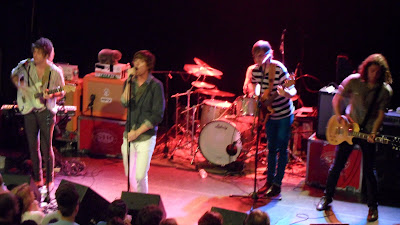 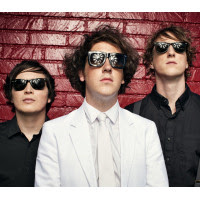 When I was at the White Lies concert two weeks ago, I asked the guy next to me if he knew the name of the song that opening band School of Seven Bells was performing. I ended striking up a conversation with the guy before White Lies set began. It turned out that the guy not only worked a day job at the same company as I do but also has a passion for music and following bands. His name is Jegan and the reason I'm writing about him, is he's the guy who turned me on to The Wombats. Once I gave the band a listen, I wanted to write about them and made sure I found a way to get into their sold out show. 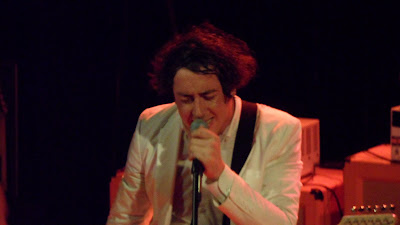 The Wombats are a band out of Liverpool, with accents to match.  Aesthetically, I wouldn't say they are the handsomest band in the world but they do make up for it by delivering great pop rock music. All of The Wombats' songs are really fun, especially in concert.  And although Matthew Murphy's song titles, choruses and/or hooks are always quirky in an awkward sort of way they seem to stick with me like crazy glue. 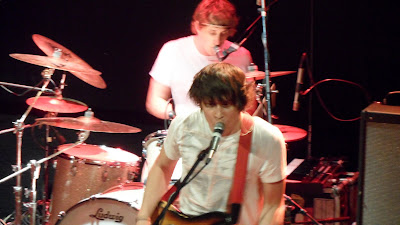 For the first song, lead singer and guitarist, Matthew Murphy started "Our Perfect Disease" by singing over a chord he played on one of the two keyboards in front of him.  Once Dan Haggis joined in with a heavy kick drum beat, Tord Øverland-Knudsen prompted the audience by clapping his hands above his head as his bass dangled from his shoulder. The audience was totally obedient, they sang along from the moment Murphy opened his mouth to sing and clapped along from the moment Knudsen first raised his arms above his head. 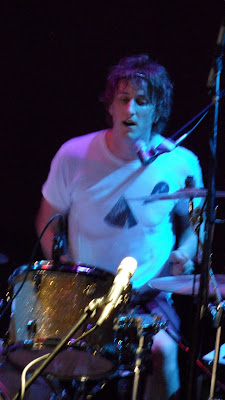 Haggis and Knudsen performed background vocals, sometime in unison and sometimes in harmony for all of The Wombats set.  Knudsen also kept it interesting by constantly moving around on his side of the stage which worked well as a counterpoint to Murphy who was mostly tied to his keyboards, guitar and lead vocals. During "Kill the Director," Knudsen shot back and forth from one side of the stage to the other, several times during the song, before stopping to hold his bass in the air as Murphy began chanting "This is no Bridget Jones!"  The audience joined in with the chant as the band started to once again play until slowing down to a grinding halt. 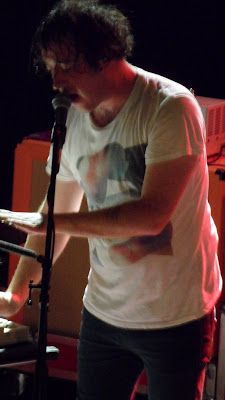 Murphy spoke to the audience by announcing the bands name, where they were from and stating that it was a pleasure to be in New York. (Which is like an ASL for bands except they're not in a chat room.) There was then a distorted guitar sound and feedback as Haggis broke into the 12/8 beat for "Party Into A Forest (Where's Laura?)."  During the song the crowd cheered as white lights from the stage lit the audience. When the Murphy played the beginning keyboard part for "Jump Into the Fog" the audience automatically cheered. It was pretty cool how Murphy went seamlessly back and forth between keyboard and guitar.  Although, toward the end of the song, Murphy looped the theme that was played on keyboard and then stayed on guitar through to the end. 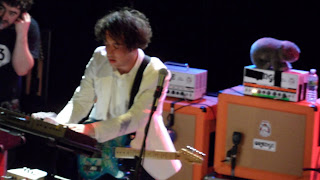 For "Here Comes The Anxiety" Knudsen prompted the audience to wave their hands in the air as Murphy did the lead in vocal.  Murphy moved around with his guitar in hand on the break and played a small lead as he faced Haggis on drums.  After the song, Murphy said the following song was about a night out at a Rave in London.  The song was "Techno Fan" and this time I cheered along with the crowd - it was and is one of my favs! 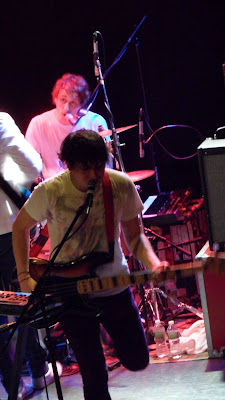 Before "Schumacher The Champagne," drummer Dan Haggis asked if anyone in the audience had ever taken the Sky Express Bus from Boston to New York. He said that the band did and arrived in New York's Chinatown at 3 o'clock in the morning. Haggis alluded to it being quite an adventure.  I guess it was more than a sobering coincidence hearing that 4 people had died in an accident on the same busline coming from North Carolina that very same evening. When the band finally did "Schumacher The Champagne," Knudsen played a small keyboard instead of bass.  As the song played,  I realized it still wasn't one of my favorites on the new album but it was growing on me. 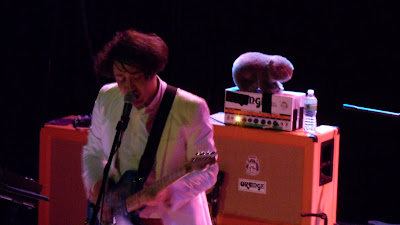 Murphy was wearing a white collared shirt and what looked like a white tuxedo jacket for most of the band's set.  As he was wiping his face, it seemed he suddenly had an epiphany.  He said, "I don't know why I insist on wearing such impractical attire." The Wombats then performed "Backfire At The Disco" as the audience clapped along with Dan Haggis' 4/4 kick drum beat.  Before the end of the song, Murphy told the audience he was going to count to four and wanted the audience to scream "Haggis," which they did.  (Except for being a fun thing to do, I don't think there was any point in screaming the drummers name....or did Murphy say to scream "shag us?" hmmm!) 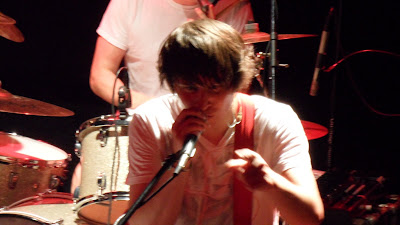 Murphy said "and now for something totally different" before playing "1996."  He later made me chuckle a little when he said "I always feel a slight sense of embarrassment when we play this song in New York" before doing "Moving To New York."   Murphy is a very like-able guy on stage with a great voice.  Murphy delivers resonant, clear and melodious vocals, along with his accent, which gives his vocals a playful quality and make him a powerful front man.

The audience sang along pretty much all the way through "Moving To New York," as Murphy and Knudsen rocked out on guitar and bass through to the end of the show. Especially when it came to the speed up part of "My First Wedding," when the audience chanted along with the words "She's Not That Beautiful," as they jumped up and down in place. 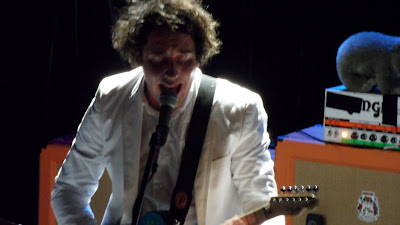 As The Wombats were about to do the last song of their set, Murphy said "This might be the last song, it's entirely up to you."  Murphy took off the guitar and played keyboards for Tokyo "(Vampire & Wolves)."  The audience sang along with the song but this time they sang loud enough to match Murphy's amplified vocals.  Murphy said "Cheers" and the band walked off stage.  There was more yet to come. 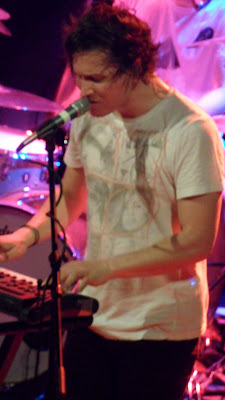 The best part of the show was the encore. Not only because The Wombats did my two absolute favorite songs "Anti-D" & "Let's Dance To Joy Division." It was the part of the show when the audience and the band seemed to have the most fun. During the second song, a guy hopped on stage preparing himself to dive into the audience. Security ran out to get him but it was too late he was already body surfing over the crowd. 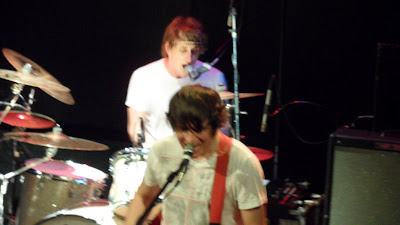 Once the second encore song ended and the band said their good nights, Dan Haggis thought he would give it a go by jumping into the audience to do some body surfing himself. Once Haggis surfed back to the stage, Murphy gave it go.  From where I sat in the balcony, it looked like Haggis and Murphy were trying to convince Knudsen but he wasn't having it.  I think his two band mates won out because he finally gave it go before all three gentlemen called it a night. 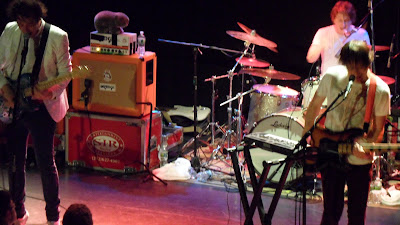 Tuesday was my first time seeing the Wombats and it won't be the last.  They have great pop songs and are 100% fun. Maybe next time I will leave my pen, pad and camera at home and jump up and down in front of the stage with the rest of the audience.


The Wombats' set list
Our Perfect Disease
Kill The Director
Party In A Forest (Where's Laura?)
Jump Into The Fog
Here Comes The Anxiety
Techno Fan
Schumacher The Champagne
Backfire At The Disco
1996
Moving To New York
My First Wedding
Tokyo (Vampire & Wolves)

Email ThisBlogThis!Share to TwitterShare to FacebookShare to Pinterest
Labels: All Postings, The Wombats/ Wild Party