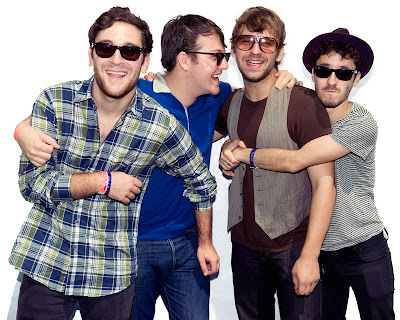 I like Mercury Lounge, it's reasonably small and a good place to see a band up close. Since the place was crowded, aside from feeling conspicuous, I had a harder time than usual writing things down and taking pictures. But over all, on a night when seeing both bands was worth more than double the price of admission, I was glad to be there. 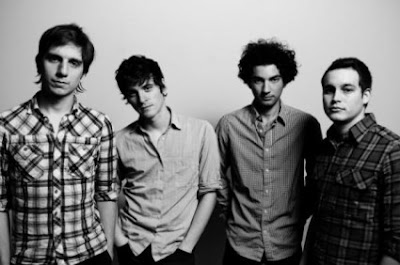 It was extremely hot in New York City last Wednesday night, but despite the heat The Dig moved around during their set as if they were on an air conditioned TV sound stage. I was sold on The Dig from the moment they began their first song, "Carry Me Home" with it's slow groove. Erick Eisner started the song off with a two chord pattern on what looked like a vintage Rhodes and a Casio CZ1000, played through pedals. Emile Mosseri joined in on bass, and then with vocals that were just as strong as his bass playing. Eiser switched from keys to rhythm guitar and guitarist, David Baldwin, played a piercing yet effective lead as the band rocked out before ending the song. 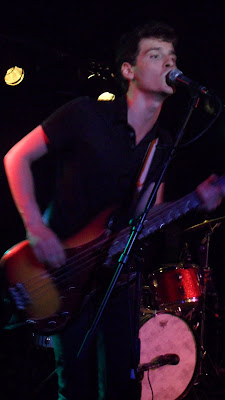 The first three songs of The Dig's set were the same as the first three on their current CD "Electric Toys." For the second song,"Two Sisters In Love," Baldwin took over the vocals and Mosseri sang on the bridge. It occurred to me as I was standing in front of the band, as well as when I heard the recording, that the song reminded me of Radiohead's CD "The Bends." The song that followed "You're Already Gone," was a straight up pop song with Eisner playing 8th note pedal octaves on keyboard as Mosseri sang the chorus "Oh now baby - 4 minutes ago you were in my arms and now YOU'RE ALREADY GONE." 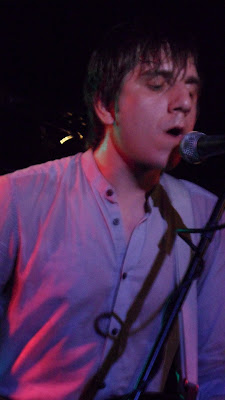 The Dig gained momentum with their new song "Already Forgot" and kept it going with "He's A Woman."  The latter song was sung by Baldwin with Mosseri joining him on the chorus. I like the fact that both the bass player and lead guitarist in the band sing; it's very Beatles. I wonder if each wrote what they sang because what Baldwin sang seemed more elusive, where the songs Mosseri sang seemed more straight forward. 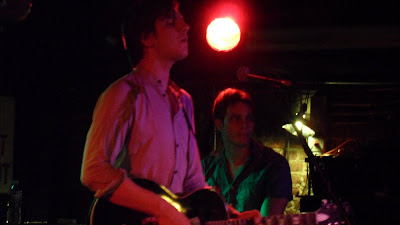 I definitely thought The Dig kept it interesting with songs like "Look Inside" with it's hard driving bass. The song, again reminded Radiohead and maybe even Gang of Four. The Dig did three more songs, one of which was the new song "European Police Car," and although it wasn't announced I believe the last song was new as well. 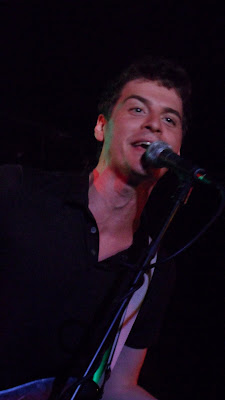 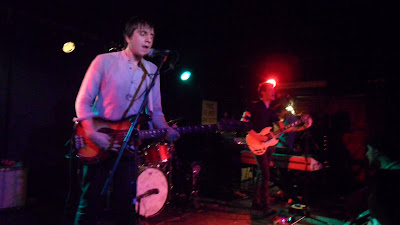 Even though The Dig did a full set, I wanted to hear more.  I noticed that The Dig are opening for Beady Eye's sold out show on June 23rd. If you're reading this, and going to the show, try and get there early. The Dig are a band you should not miss and between both bands it looks like it's going to be a great night. 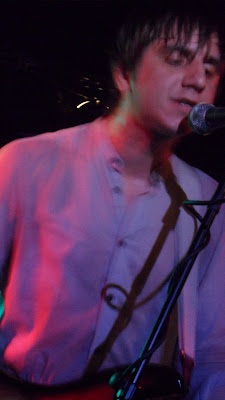 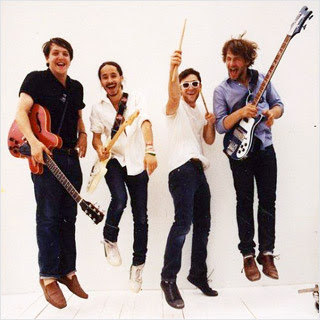 Last week, The Postelles performed 2 shows at Mercury Lounge to celebrate the release of their new CD on June 7th. I was there for the second night of their engagement and was pretty impressed by the weeknight audience turnout, as well as the band themselves. Like I stated earlier, it was one of those hot muggy sticky nights in New York. The temperature during the day had been in the high 90's and was about 88 degrees that night. But as with The Dig, The Postelles didn't seem to care; they gave 100% and worked up a sweat. 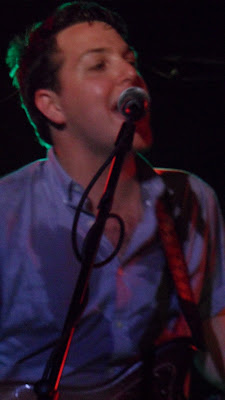 The Postelles first song was "Stella" with it's "Lust for Life" guitar rhythms and heavy backbeat.  Lead vocalist and guitarist Daniel Balk, who wasn't wearing his usual pork pie hat but was sporting a somewhat grown out faux hawk, counted the band off. While Balk is the shortest guy in the band, as with all front men, on stage he has the largest presence. From where I stood on Wednesday night, Balk seemed to give off a strong sense of camaraderie between himself, his band mates and the audience with a sort of hyper sexiness. 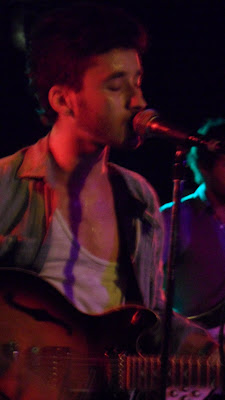 The Postelles moved directly into "She She" with David Dargahi playing lead guitar over John Speyer cool bass lines. The Postelles reminded me of bands like The Strokes and other bands I've seen like The Films, The Rassles, and perhaps Wild Party which is another New York band I've recently written about. However,The Postelles seem to have a great sense of fun which was really evident during their entire set and especially during the following two songs. The first being "Sound the Alarms" and the second being "Beat the Brat" by the Ramones. There was gaggle of gals and guys dancing in front of the stage as well as singing along. During "Beat the Brat," Balk jumped off stage and put his arm around the shoulders of one of the guys, sharing the vocals with him for 10 seconds or so before jumping back on stage. 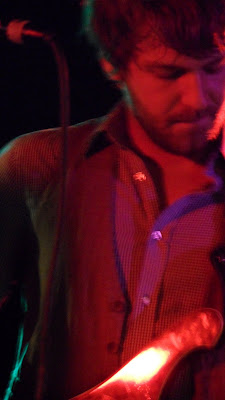 The  Postelles next did "Looking Glass" which had a bit of an early Elvis Costello feel to it, that I wouldn't only attribute to Balk's "Oh - oh -oh" vocal line but also to Billy Cadden's backbeat on drums, both guys jangling guitars, and Speyer's basslines. "Looking Glass" isn't included on The Postelles new CD but is on their earlier EP "White Night." (The EP isn't available on Amazon or Itunes, but Ebay had 2 used copies of the actual CD) The very pop "123 Stop" also reminded of early Elvis Costello but I would also include a whole bunch of bands from the late 70's early 80's period, The Ramones being one of them. 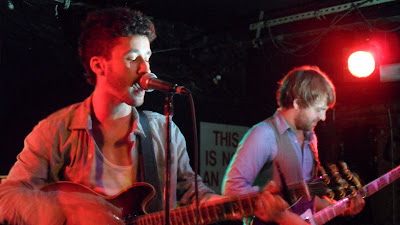 Switching it up a little, David Dargahi shared the vocals for "Hey Little Sister" by taking the A section of the lyric and Daniel Balk taking over the B section. The Postelles followed the song up with the new song "Running Red Lights." Between last Wednesday and writing this posting, I can't say I remember how the song went but do remember enjoying it. I did write down the song's lyric, which was essentially about thinking that a woman was on his side and finding out she wasn't. The hook that kept repeating in the song was "It's not funny" 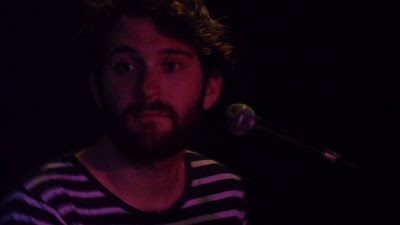 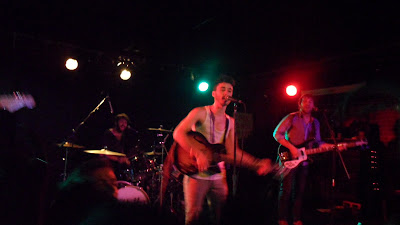 The Postelles did another cover and I was almost fooled into believing it was one of theirs but it sounded too familiar. I came to find out that it was "Whole Wide World" by Reckless Eric which totally fits in what I was saying before about the The Postelles late 70's sound. From the next song out, the last three songs of the set felt like The Postelles greatest hits. Starting with "Can't Stand Still," which seems totally in line with Daniel Balk's stage presence, The Postelles ended their set with a bang. 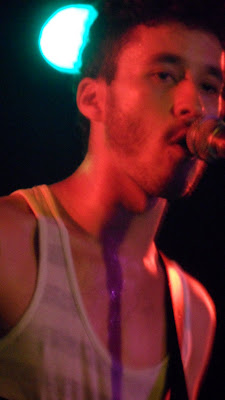 After The Postelles' set ended, I grabbed their set list off the stage and noticed that "Sleep on the Dance Floor" was originally supposed to be the third song.  This writer is just grateful that they played it because it's one of my favorites and it's even better live. The Postelles ended with "White Night" without coming back for an encore.  They had done a pretty long set for a place like Mercury Lounge. But after all it was release celebration for their first full length recording and I'm pretty sure it won't be their last. 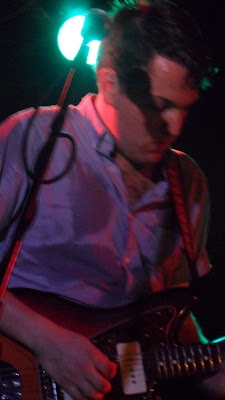 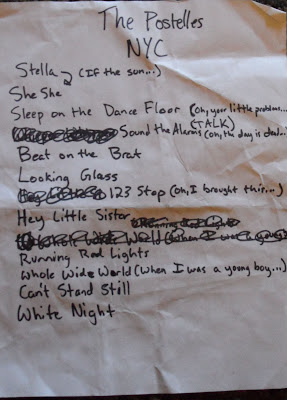 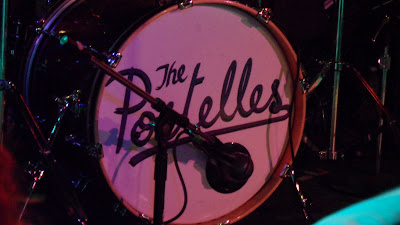 Email ThisBlogThis!Share to TwitterShare to FacebookShare to Pinterest
Labels: All Postings, The Postelles/ The Dig