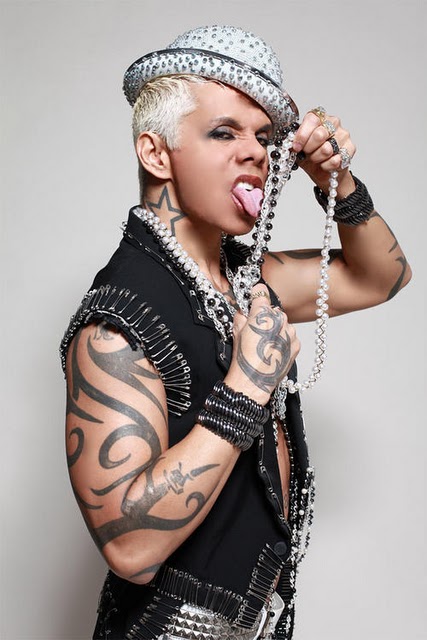 Friday night was my first time seeing singer Raven O. I wasn't sure what to expect after watching videos of him on YOUTUBE. I was hoping that it wasn't going to be a traditional cabaret and gratefully it wasn't, O's performance was more of a nightclub act.  The difference for me is that everything he did felt off the cuff and in the moment. I'm sure he has told the stories he told and sang the songs he sang many times before but I got the feeling he never did them the same way.
Raven O dresses like a modern day Liberace with rings on almost every finger. Aside from serving basket (as in bulging crotch) and a buff tan body with lots of tattoos, he serves up glitz.  Raven O wore a diamond studded star around his neck and diamond wristbands on both arms. Unless, he's Donald Trump's new bitch, I was okay with suspending reality by appreciating his jewelry as real diamonds.
The timbre of Raven O's tenor voice reminded me of Wayne Newton and his sometimes playful approach reminded of a young Shirley Bassey. But those comparisons are just points of reference. They don't convey Raven O's personal sense of jazz phrasing, timing and vocal dynamics which were all spot on.
Raven O came out before his performance wearing a black and white silk robe. The outfit was very Hollywood TV special.  It conveyed that he was the star of the show who had taken time out, from his dressing room beauty routine, to introduce his special guest.  Actually, the introduction was quite heartfelt.  O basically stated that he enjoyed giving back to people who had helped his career along and then welcomed Paul Walter to the stage. 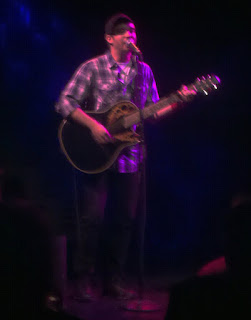 Singer/songwriter, Paul Walter is the stage manager for The Box where Raven O has often performed. (The Box is a Lower East Side nightclub.) Walter expressively performed two songs on guitar. The first song was my favorite.  I don't know the song's title but the lyrical hook was "What Was I Looking For." During the song, Walter soulfully sang while he strummed tasteful chords in reggae rhythm. My guess for a title of the second song would be either "Harder to Live" or "Lifetime of Luck." The guitar work for the song was interesting; it sounded like he was playing chords and a bass line on a single guitar. Though Walter's set was very short, it was memorable. I hope to be hearing more from him.

Ben Alison opened Raven O's set with a bass line that sounded like it was from The Doors "Roadhouse Blues" but it was actually for the title song of the show "One Night With You."  Before I go any further I have to state that Ben Alison is a fucking amazing stand-up bass player.  Amazing!  He is the kind of bass player every vocalist dreams of working with, me included.  Alison not only accompanied Raven O, but worked off of his vocals by accenting and underling his melody lines.  Alison seemed to be always there quietly playing through Raven O's patter and gently segueing into the next song.

As Alison was playing the shows intro, Raven O was behind the curtain making weird sounds.  When he walked out, he wore a sort of military bolero length jacket which would later come off. After and during "One Night With You," O welcomed us to Joe's Pub, then said the last time he played there he was smoking crack.  The audience chuckled.  It was the first indication that Raven O's set was not going to have a PG rating (thank you God!).  There was more sex, drugs and hilarity to come.

Raven started his second song by telling the audience about growing up in Hawaii.    He told the audience about how his parents met and fell in love with each other after bringing a child into the world.  He explained that his father came from a more rural area than his mother who was more educated.  As a child, O said that he shared a great love of music with his mother.  He said he loved the music his mother played from musicals but did quite get musical theater. O, as a child, felt that breaking into song in the middle of dialogue didn't make sense.  As he comically told the audience about his childhood, Raven O eventually got to place when his parents asked what the he wanted to be when he grew up.  I won't give away the punch line, except to say that the story was a setup for the song "Not Easy Being Green." 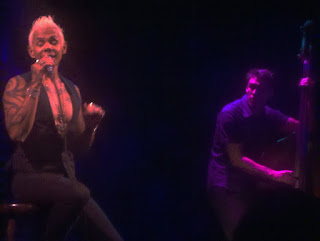 Raven O worked in Cirque Du Soleil with, singer and drag legend, Joey Arias who was in the audience on Friday night.    Before his next song, O told a funny story about Joey Arias picking him up in New York with a limo to catch a flight leaving for Hong Kong.  It seems Raven O forgot he was going to Hong Kong and was strung out on crack from the night before.  After telling the story, Raven O said he spent 3 years in Las Vegas with Cirque Du Soleil.  He then mentioned some of the great artists that had worked there like Sammy Davis Jr., Frank Sinatra and Dean Martin before singing his personal homage to Las Vegas,  "Fly Me To The Moon."  My favorite part of the song was when O did a cool ad-lib vocal from his mid to his lower register repeating the words "I love you."

One of the evening's highlights, was O's story about how he got the hell out of Hawaii.    The hysterical story included a dance contest and an approaching storm - other than mentioning those two things I don't want to give the story away.  After the story, O did a version of "Rainy Days & Mondays."  He said he really didn't understand the meaning of the song until he heard Sarah Vaughn do it.    I don't know Vaughn's version but I can honestly say that Raven O's version is worth hearing.  O sang in his higher register but with a  lighter quality to his voice to convey the songs melancholy sentiment.  The arrangement was very different from the carpenters but still worked.

Raven O performed a sort of strip-tease for "Just A Gigolo," by removing his jacket to reveal a vest worn over his shirtless upper torso. While he was at it, O threw in a couple dramatic modern dance moves. The kicker was when he looked down at his earlier mentioned basket and said "Can you see that? - if you can't see it - you need glasses." O followed "..Gigolo" with an upbeat version of "Love For Sale," by singing it more like a proud and pretty ho than a worn out prostitute. At one point,O asked all the whores in the audience to raise their hands. (Yes! I raised mine.) He then questioned some people in the audience who didn't raise their hands and arrived at the conclusion that we are all whores in one way or another. 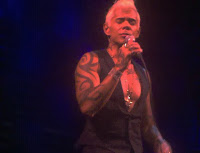 There was a point when Raven O displayed his artistry as a performer by reeling the audience in with laughter before singing "Ring of Fire" in a way that felt extremely personal. O told a story of a relationship with someone who's name he didn't want to mention, so he named him  "cunt." He told how he and cunt went to see a Broadway musical while they were both high on their opposing drugs.(O's was coke and cunt's was heroin.)  O's story conveyed the hilarity of the situation and the song conveyed his personal feelings around it.

O sang "Nature Boy," taking liberties with melody.  He basically dedicated it to his new love and after the song made a comment about not wearing water proof mascara. ( I didn't see any tears but I guess he felt all welled up.)

O returned to musicals for the last two songs of his set.  As Alison played a funky walking bass line O' did a somewhat gayer version of "My  Favorite Things."  (I know you're thinking - how much gayer can the song possibly get?) Alison seemed to be having fun really groovin' along on bass and O' worked with the feel by scatting in the middle of the song.  Somewhere toward the end of the song O' changed one of the lines to "boys in white dresses with white satin sashes."  The audience applauded.

The song that was a surprise was "Being Alive" from the musical Company.   Though the song is well known among theater goers, it isn't as well known to general audiences and therefore felt a little more contemporary than the other songs in O's set.

At the end of the show, Alison returned to that Morrison Hotel bass line and Raven O' did a reprise of "One Night With You."  For an encore, Raven O and Alison performed The Beatles "In My Life," which worked as a nice way of summing up a show that was introspective.  On the whole, I found Raven O's song choices a bit conventional but what made them enjoyable was they were presented with both humor and sincerity.  When I was younger, there was a friend of mine who would use the word "orgasmic" to describe a good time or a happening event.  I think Raven O at Joe's Pub fits nicely into that category. Orgasmic - indeed! 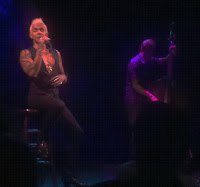 Email ThisBlogThis!Share to TwitterShare to FacebookShare to Pinterest
Labels: All Postings, Raven O with Ben Alison