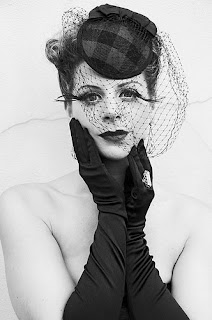 Lady Rizo, who's real name is Amelia Zirin-Brown, has a comedic flare and soulful voice that is very much her own.  There were moments on Friday night that showed me that Lady Rizo can do vocal gymnastics with the best of them. But for the most part, Lady Rizo's professional vocals are powerful and straight forward.(She's not singing on a Yo Yo Ma CD because she can whistle in the shower.)

The first time I recall seeing Lady Rizo, was her cameo in Taylor Mac's recent show at Joe's Pub. I now realize it was actually the second time I saw her – the first time was in Taylor Mac's play “A Lily's Revenge.”  Anyway, when I saw her a second-first time, I wrote about her New York attitude. She seemed too edgy and street smart to be from anyplace else. Well - she fooled me. During Friday night's performance, she made references to living out west.  I also read on one of her My Space pages that she's originally from Newport, Oregon.

I got the impression that Lady Rizo is a very busy woman.  She's at Joe's Pub once a month in her own show titled “Unescorted," and is a regular guest artist in a revue called “Hit Parade.” Aside from her appearances at Joe's Pub, Rizo performs around town with her backup vocal group the Assettes. And beyond that, I've found out she's done some recording and acting under her real name.

When my friend Mark and I arrived at Joe's Pub we were seated at a row of tables to the left of the stage. A really handsome gay couple, who seemed to be out on a date, was seated behind us.  We chatted with them about the usual things like where they were from and what we all did for a living. Then later on we toasted, wishing each other a happy pride.  In front of us were two women talking to a guy who was seated in front of them. The European woman seated in front of me kept whipping my face with her blond hair through the show. The brunette in front of Mark was reminding him how elegant it is to eat a chicken sandwich with the smell of eau de parfum assaulting his nostrils.

The stage was setup with a screen in front of the performer's entrance. Instead of the band setup being around the entire stage, the band was in the corner on stage left. Over the past nine months, I've been to Joe's Pub several times and there has always been a low grade hum coming from the stage. For Lady Rizo's show the hum was gone. I don't know if the band setup was a conscious choice or it just worked out that way but it was nice to enjoy a hum-less show. (There's always the occasional train rumble – but that's part of the charm of Joe's Pub).

When the lights went down, the band started to play some jazzy cocktail music. Lady Rizo, walked out and stood next the stage entrance suavely speaking the beginning lyric of “That's Not My Name.” By the time Lady Rizo got to the middle of the stage the band kicked into a rock feel and Lady Rizo was singing the song in full voice. In the middle of the song, Lady Rizo let the audience know she was definitely in the house by singing two choruses of “Liza with a Z,” inserting the line  "It's Rizo with a Z."  She then worked the middle section of “That's Not My Name” into a vocal frenzy before going back to the chorus.
The band's vocal part for the first song was to sing “Name, Name, Name, Name.” The audience laughed at the end of the song when pianist Robert Cowie, made what sounded like a belch for the last “Name” Lady Rizo later emailed me, advising that “Liza with a Z” was a suggestion made by NPR's,  Ari Sharpio. (See – I told you she's a busy Lady!.)

Lady Rizo wore a sequined evening gown with a black feather boa around her neck. After her first song, she grabbed herself a martini and chatted up the audience.  During her opening patter, Lady Rizo had many funny moments which culminated with a group kiss between her and the audience.  She then told the audience, if she didn't choke herself with the feathers she wore around her neck, she was going to sing us a few songs.

Lady Rizo did a hilarious quasi-striptease for the beginning of the 2nd song which she sang in Spanish. She started by taking off the feather boa around her neck and slowly taking off her gloves. One of the gloves she took off by grabbing the middle finger with teeth. She then had a long stemmed rose which she put in a male audience members mouth and then tried to take back by putting her mouth around the other part of the stem. It was a funny sexy moment but it didn't end there. She sat down on a chair, pulled up her dress and pulled another stemmed rose out of her guarder belt. I couldn't help but wonder, through the entire song, if the thorns were taken off the stems before hand. Toward the end of the song, Lady Rizo bit off the rose from the stem then allowed the pedals to flow out her mouth like feathers.  She told the audience once the song ended, that in case they were wondering,  rose pedals don't really taste so good .

The next song was a funny and strange arrangement of Prince's “When Dove's Cry.” It kind of sounded like a dirge, which Lady Rizo comically approached as if she were singing an anthem. After the song she joked about the film “Purple Rain,” specifically mentioning Apollonia's “Great” acting ability – not!

At some point before doing her next comical bit, Lady Rizo spread her arms and announced to the audience “Ladies and Gentleman-it's the recession.” I think many in the audience laughed, not only because it was a funny non sequitur but because we didn't know where she was going with it. Basically she was making a statement about how the recession is a great time for the arts and what a great time it is to be an artist in New York. I'll inject my opinion here to say that I totally agree. All the great art and music from the late 70's and early 80's came about when Jimmy Carter was in office and before Reganonomics kicked in. I think some great things will come from this economic downturn as well.

Lady Rizo's continued to keep her audience amused by asking if someone wanted to help her change.  She semi coerced a male volunteer who was sitting at one of the front tables. Lady Rizo brought the audience member behind the screen while the band played some sexy lounge music under their conversation. Of course, their was a light behind Lady Rizo and the guy which threw some suggestive shadows onto the screen. Lady Rizo asked the guy to tell a sad story about his first sexual experience.  As he told the story and  she changed, Lady Rizo inserted some quick witted comments.

When Lady Rizo came back out she wore a gray winter coat.  As she parodied the song “I Will Follow Him,” she took opera glasses, rope and eventually a knife out of the coat's two large pockets. All of us in the audience hysterically laughed as Lady Rizo mimed killing a lover with each stab to the chorus of “I Love Him,(stab) I Love Him (stab), I Love Him (stab) etc.,

For her next song, Lady Rizo asked drummer Ray Rizzo, to give her a beat.  She then brought on vocalist Amber Martin after saying “New York is not dead, we're gonna bring it back to life!” Martin came out in a black sleeveless jumper and blonde curly hair. Together, Martin and Lady Rizo gave their shout out to Babs by singing “Black Widow” from "A Star Is Born."   With two powerhouse voices on stage, the song was one of the many highlights in the show.

After the Barbara Streisand song, Lady Rizo went back stage to do another costume change. Martin stayed on stage to sing a jazz standard as Ray Rizzo played the highhats with brushes.  I loved Amber Martin's voice but I think the song went on a tich too long. The novelty of just percussion and voice kind of wore off after two minutes; it would have been nice if the band kicked in at some point.

After Amber Martin's song, Lady Rizo came back out in a red dress. She talked about how she was raised by hippies and rebelled with glamor. After a few more funny anecdotes and references to it being gay pride weekend, Lady Rizo appropriately sang “Coat of Many Colors ” adding Blondie's "One Way Or Another" halfway through the song.  During the mashup, Lady Rizo turned her 3 quarter length red dress into an evening gown of red, yellow and green. After the song, Lady Rizo told the audience the dress was made by Machine Dazzle. (Same guy who made Taylor Mac's costumes and is also one of The Dazzle Dancers.)

Lady Rizo introduced her rendition of “Summertime' by saying it was a song she always sang on the West Coast but hardly ever in New York. When it came time to take a solo, a clarinet player that goes by the name Mountaine popped out of the audience. The guy sitting with the blonde & brunette babes in front of us said “He looks like Merlin,” which was true; what he wore kind of made him look like a wizard. But Mountaine then topped himself by exchanging his clarinet for a slide whistle after stripping off his costume to reveal the schmata dress he was wearing underneath. He played whistle for the next song and wore a bonnet to match his dress.

After Mountaine changed on stage, a hand and rod puppet was brought out. The puppet's name was Polly G and referred to as PG. While watching the show the other meaning of Polly G's initials went right over my head like a 747 going over a mouse on the runway at JFK. After having a little chat with Polly G, Lady Rizo sang “I'll Be Your Mirror” to him.

Lady Rizo ended the show with what she called a little bit of gospel-reggae. It was a kick-ass version of “Survivor” by Destiny's Child, which she also used to introduce the band members. She sequed from “Survivor” to “I Will Survive.” When the song ended Lady Rizo said goodnight and wished everyone a very happy pride.

Lady Rizo, Unescorted is a wonderfully funny show but it left me feeling like I only got a taste of Lady Rizo's talents. It felt like there was so much action packed into one show that it went by in the blink of an eye. I would have liked to have heard maybe just one serious ballad interwoven into her comic performance. I am not suggesting cabaret schtick. Just an intimate moment when the audience felt we were getting something personal (even if we weren't).  A moment when the show slowed down to where it was just her and.the audience.


On second thought, I would like to see Lady Rizo in a longer show, on a larger stage and performing for a bigger audience.  She warrants all three.

Email ThisBlogThis!Share to TwitterShare to FacebookShare to Pinterest
Labels: All Postings, Lady Rizo