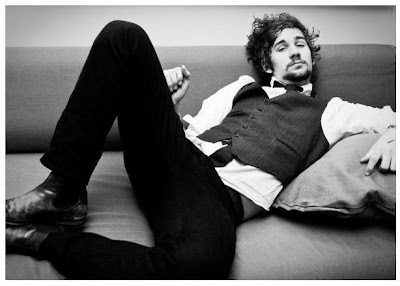 When Adam Taylor's publicist asked me to check him out, she wrote in the email “he is a 19 year old Bob Dylan incarnate.” That scared me. I have nothing against Bob Dylan but over the years I have sat through more than my share of guitar totting folk singers. I've been to too many shows where the artists have sung deep meaningful lyrics, while strumming 3 chords on their acoustic guitar. I believe like sex, liquor and chocolate, folk music should be listened to in moderation.

I think that's why Adam Taylor was a surprise. No doubt there is a folk sensibility at the heart of his music, but the body of his music covers many different genres. As Taylor went through his 11 song set, I could hear that he's been influenced by a wide range of artists. What I found exciting about Taylor's music was that he often incorporated many of those influences into one song.

Taylor's stage presence is very relaxed and his rapport with his audience is quite good. There was a guy walking around with a rather large camera taking pictures of Taylor and guy sitting right in front of him writing things down. (That would be me.) If I were on stage, performing in a small place like Rockwood Hall, I would be hyper conscious of those two people. But Adam Taylor did not seem phased at all.

Adam Taylor opened up his set with a song that had a bluegrass feel  titled “Jazzionia.” Taylor sang and played guitar as the band clapped on the upbeats before coming in with bass and drums. Kate Young joined on background vocals for the chorus. I thought it was ingenious the way Taylor smoothly went from a 2/4 feel to a slower 4/4 feel and then back to 2/4 at the end of the song. The first seque was done by having the music drop out for a moment while Young and Taylor introduced the middle section of the song by singing acapella. Both of them sang into one mic and looked as if they were looking at each others lips while singing. It was a very sexy moment. Kate Young with newly dyed platinum hair and a black flowing dress was a beautiful compliment to Adam Taylor, both musically and esthetically.

The next song “Oliver” started with Mike Giblin's funky bass line which continued through the song. The song's very rhythmic verse went into a very memorable hook – the line was “For awhile, For awhile, For awhile I couldn't trust myself.” It's funny - though it was a very different kind of song, at certain points the guitar and bass parts of “Oliver” reminded me of T.Rex's “Bang A Gong.”

Adam Taylor did a cover of The Strokes “12:51.” I've heard The Strokes version quite a few times and though Taylor's version sounded familiar when I heard it, I still didn't realize they were the same song. It's probably because Adam Taylor's vocals were up front and Taylor found a groove inside the lyric. Taylor sang the lyric in a more conversational way by clipping the words that rhymed as opposed to elongating them as Julian Casablancas did on the original. There was a funny moment when Taylor reached the end of the bridge where the vocal sort of spirals and then stops for a moment. The audience was about to clap but Taylor waved at the audience and said “Don't clap, this is the part where you breath.” I liked the fact that while performing, Adam Taylor was present enough to notice what the audience was about to do.

“Story of the Sea-Green Sky pt.II” is where I started to tune in to some of Taylor's interesting lyrics. In the song Taylor mentioned the relationships of everything between the sky and sea (birds & flowers, the sun and moon, cactus and sand, etc.,). Don't ask me what the song was about because even though Adam Taylor over enunciated for the song – I didn't get all the lyrics. (I take notes but I'm not a stenographer). The line in the song that got applause was “Now the rain loved Seattle, but Seattle killed Kurt Cobain.” Musically, the song had a cool-cat blues feel with it's walking bass-line.

While switching to electric guitar from acoustic and before doing one of his newest song's “Stove,” Taylor quickly introduced his band. Taylor told the audience he was from Lancaster, Pennsylvania and that it was the first time he brought his band to New York with him. “Stove,” like the song before it, also had a blues feel and lyrically also reminded me of Tom Waits.

When Taylor was about to do the song “New York,” he mentioned how he hated where he grew up but lived on a musicians salary. The song was more about a person leaving where he comes from rather than an homage to New York City.  As Adam Taylor was singing the quality of his voice reminded me of Issac Slade from the Fray. (Note: I couldn't recall the singer's name or the band while watching Taylor. I wrote in my notes “vocals like that bald headed guy from that band.”).

Adam Taylor did a very clever medley/mash-up (whatever!) of Blackstreet's “No Diggity” with the Beatles' “Come Together.” Drummer, Jason Hoffheins started off the song with Mike Giblin later coming in with the well known Beatles bassline. Both songs are very soulful but come from different genres, it took someone like Adam Taylor to but them together and make it work.

One of the highlights of the show was “Elvis.” On his recording, an electric guitar plays a 70's wha wha but in concert Taylor uses his acoustic guitar giving the song a 60's James Brown feel. The song had some very clever and descriptive lyrics. The song's chorus is “Come on, break a leg - and climb on down the rabbit hole - tell Alice that Elvis wants his – crown back in his grave -'cause Graceland ain't big enough to house the dead” Maybe it was the lyrics or maybe the guitar – or maybe both but the song reminded me of the Doors “Peace Frog.”

Adam Taylor came full circle by doing another song with a bluegrass feel titled “Lucy.” The song has a hook that sticks in your head like clue “she's a deceiver, I can't believe her if I tried.” Taylor had another “breathe” moment in the song. That time it was a little longer and and we all let the silence be until Taylor came in with the chorus.

Adam Taylor ended the show with just himself and Kate Young on Vocals. They both harmonized together using the same mic as they did in the beginning of the set. And again, I thought it was very sexy. The song was a beautiful ballad named "Cat's Cradle." As I was finishing up this posting, I found that someone beat me to the punch by not only writing about Adam Taylor's show but by putting up some very cool black and white videos. You can hear and see “Cat's Cradle” by going to Quirky NY Chick's You Tube page or see more videos by going to her blog: http://www.quirkynychick.com/ .

When Adam Taylor finished his set I was sold. Completely sold. I asked Adam Taylor for his set list before the show. He told me that he doesn't write one. He generally thinks of what he wants to do next as he goes through the set. For most artists that could be a very dangerous choice but Taylor has very good instincts. When the show finished I felt like he did a complete set with a flow that felt as if there was a concrete beginning, middle and end.

Adam Taylor is a dynamic performer. More so than his recordings or even actual videos of his live performances can convey. If this blog posting has peeked your interest in any way, check out Adam Taylor at The Living Room in NYC on June 30th @  7PM. You will definitely see what I am talking about.

Email ThisBlogThis!Share to TwitterShare to FacebookShare to Pinterest
Labels: Adam Taylor, All Postings