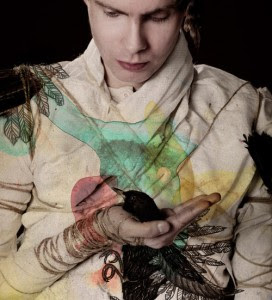 I arrived at Terminal 5 with a friend of mine at 7:15. I wanted to make sure I was there early and didn't miss the opening performer. With a name like Death Vessel, I was curious.  As I passed the stage to get to the balcony, I noticed that the curtain behind the stage looked like a painters dirty floor canvas. There were square boxes with transparent screens at the top. Two boxes were on each side of the stage. The two front boxes on either side (or the two boxes which were downstage) seemed as if their screen parts were burnt.

The music that was playing over the sound system before and after Death Vessel's set sounded like new age piano player George Winston. It also sounded like the music my chiropractor might play while there's a heating pad on my back and he's working on another patient.

The stage was filled with an odd assemblage of percussion and keyboard instruments that would be used for Jonsi's set. The keyboards were an upright piano, an organ, a few digital keyboards and a small keyboard in a suitcase. The percussion instruments were 1 vibraphone, 1small metal xylophone  and two sets of drums; one set looking traditional and the other looking like it had lots of shiny brass cymbals.

The audience seemed to steadily filter in through the annoying Terminal 5 entrance.  By the time Death Vessel got on stage, the room was pretty full. Promptly at 8PM Joel Thibodeau AKA Death Vessel walked out. He had long straight hair that was parted in the middle and reached his waist. To me, he looked American Indian but I knew that wasn't the case because his bio states that he was born in Berlin and raised in Kennebunkport, Maine.

Thibodeau opened his set with “Deep In The Horchata.” (Hmmm - Horchata, where have I heard that word before?) From the moment he started playing the song's rhythmic guitar pattern, the audience pretty much quieted down. I think his guitar work caught the audience's attention and his odd voice kept them listening. “Now that you've dropped the A Bomb” was that first song's odd lyrical hook but there were still more odd lyrics to come.

Thibodeau's next two songs were “Obadiah in Oblivion” and “Bruno's Torso.” The latter had a lighter – major chord sounding feel to it but still had undefinable dark lyrics such as “Dang, thereby my shebang is an emblem of a bigger bodily crime, Blood feather stuck in mine."  (I can say the songs about HIV and AIDS but that would be a guess).  Towards the end of Thibodeau's set, there were more intriguing lyrics which made reference to Catholic symbols and traditions.

For his fourth song, Thibodeau's did something with a bluegrass feel which made the audience automatically clap along.  But I noticed that by the fifth song he seemed to have lost the audience.  On the Thibodeau's sixth song, his voice reminded me of Graham Nash.  Thibodeau's ended his set with his strongest song which had an alternative chord that worked as a turnaround between the chorus and verse.

I can't say I loved every song in Deep Vessel's set.  However, I can say I loved Thibodeau's playing and his voice.

Jónsi walked on stage at approximately 9PM with acoustic guitar in hand. Once Jónsi started his first song, Ólafur Björn Ólafsson AKA Óbó came out to play the vibraphone. Between vocal parts of the song Óbó repeatedly hit the same notes with his mallets. Those notes augmented the tranquil mood of song adding a meditative quality to Jónsi's guitar picking. Óbó continued adding color to the second song ,by running a violin bow against the edges of several vibraphone keys.

For Jónsi's second song, the other members of the band walked on stage. One member of the band was Jónsi's long time boyfriend, keyboard and guitar player, Alex Somers. The song, "Hengilás" was in Jónsi's native language of Icelandic. It might have been in his made up language of Hopelandic, but I have no way of knowing since I don't speak either language.

The second song was the start of journey that took the audience through a cycle of songs, as well as projected illustrations and animations done buy Jónsi's sister Inga Birgisdóttir . In the beginning of the song the back canvas looked like a page from an very old book. As the song progressed fire was projected on to canvas and the earlier mentioned boxes. The very real projection of fire than segued into butterflies. At some point in the beginning of the show the backdrop curtain was taken away to reveal a wall of windows panes but the projections continued. A friend of mine, who had a better view of the stage than I, later noted that the projected part of the journey was through the seasons of a year.

A concurrent somewhat fuzzy projection of Jónsi was picked up by a small camera (probably attached to his mic) for the song “Icycle Sleeves.” Drummer, Thorvaldur Thór Thorvaldsson AKA Doddi, immediately took us into the next song “Kolniður” with a slow and steady pronounced beat on his kick drum. When the band joined in, they played darkly momentous chords. As the song progressed it went through loud and grinding section with white lights flashing and brilliantly animated illustrations. The drawings were of an eagle flying over trees, and a wolf who eventually attacks a dear after running through the forest.

During the show it was hard to keep track of who was playing what on which song because the musicians kept trading off instruments between each other. For the song “Tornado,” I believe Somers was playing piano, Jónsi played vibraphone with  Óbó for part of the song and bassist Úlfur hansson played the small metal xylophone on top of the organ. “Tornado” is one of my favorite songs on Jónsi's CD “Go.” It has a brilliant lyric with lines like “You grow, you grow like tornado,You grow from the inside.”

After seeing Jónsi do it few times, I noticed that he feels the music by closing his eyes and moving his head back and forth as if saying “no.” Jonsi appears rather tall on stage and has a presence that seems completely focused inward and on his music. I the truest sense, Jónsi is a performance artist; both his music and presentation in concert are of equal importance. That presentation includes his military patterned jacket with attached colorful fringed and bandaged cloth as well as the head piece he wore at the end of the show. The projections, Jónsi's outfit, his high falsetto voice and his music were all interwoven as part of one beautiful concert experience.

Jónsi moved through several songs starting with “Sinking Friendships,” moving from piano to acoustic guitar to the ukulele which he played on “Go Do.” Bassist Úlfur Hansson had my friend and I intrigued through the entire show. First off he sat at on floor at one point and played something in a suitcase. I later found out it was nothing more than a keyboard. During the song “K12,” Hansson played something called a Monome. The thing was the size of an Ipad with lit up boxes that Hansson would push down. The Monome is apparently a computer controller by a hardware company that has the same name. Who knew?

A large degree of Jonsi's music is reliant of the nuances of different sounds. So it was only fitting that drummer Dodi changed from the kit on one side of the stage to the other, also for the song “K12,” . The kit Dodi changed to seemed to have more cymbals and an all together thinner sound. The last song of Jónsi's set “Around Us, ” had the band working up to a high point before dropping out. Jónsi ended the song by falling to his knees and manipulating his voice with reverb, delay and a loop peddle,

The band came back with what was to be a grand finale. Though "Animal Arthimatic" was expected as an big encore ending because of its pop quality, the climatic ending came with “Grow Till Tall.”  As the encore's final song, “Grow Till Tall” grew with the repetition of Jónsi singing “You'll know.”  As the music swelled, an hunched over Jónsi flailed back and forth in what looked like a fringed Indian head dress. At one point, a thin neon light was circling around his head dress making the moment even more dramatic. It was as if Jónsi was caught on the inside of the "Tornado" he sang about in his song.

Once the band walked off stage, the audience wanted another encore. When Jónsi and the band came back out, they held hands and bowed as if they had done a Broadway show.  It was clear there wasn't going to be another song. I think it was a good choice. The show was complete, the journey ended and the experience would be something not easily forgotten.

The band members are:
Úlfur Hansson on bass and monome
Ólafur Björn Ólafsson aka Óbó on piano,percussion and keyboard
Alex Somers on keyboard and guitar
Jón Pór Birgisson (Jónsi) on guitar,vocals and piano.
Horvaldur Thór Thorvaldsson aka Doddi on Drums, percussion and keys.