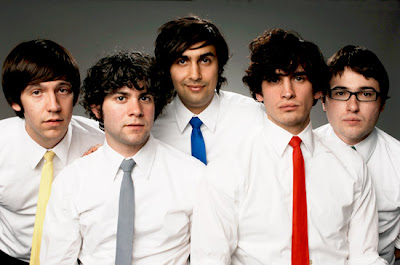 Tally Hall, Jukebox the Ghost and Skybox have many things in common.  Each band has a great sense of humor, a playful rapport with the audience and pop songs which are extremely melodic.  As a line-up, all three bands worked really well together.


Skybox played the opening set to a good size audience.  The Bowery Ballroom looked like it was approximating two-thirds full.  Usually, the first of three, opening bands have a smaller size crowd which leads me to believe that Skybox had quite a few fans in the audience.

Skybox is based out of Chicago.   The bands members are Tim Ellis on lead vocals and guitar, Christian Fields on keyboard (Nord), guitar and vocals, Dan Ingenthron on bass and keys, and Mike Holtz on Drums.  Other sites describe them as psychedelic 60's rock, classic 70's rock and  80's new wave. The first two comparisons, I sort of agree with, but the last one not so much.  I was hearing more of a 90's pop than an 80's new wave feel . (The New Radicals, Soul Asylum, Blind Melon vs. The Cars, Blondie, Police).

Skybox did 10 songs with the only slow song being "Trout."    Two of my favorite songs were "Buckets" with it's descending bass line and "In A Dream" with it's boom box beat.    For some reason, as they played "In A Dream,"  I kept thinking of Sweet's "Fox On The Run."   I think it's part of the chord progression which reminds me of the Sweet song.

Skybox visually seemed quirky.  There were times when Tim and Christian  jumped up and down in place.  There was also a point where Dan Ingenthron was busting moves while playing keyboards.  I, personally, loved just watching the band having a good time with their audience and vice versa.   Christian Fields said that the Massachusetts audience. the night before, had been really rowdy and he asked the New York audience if they could be even more rowdy.  I think it was Tim Ellis who followed up by saying " Jump around God damnit!"  I absolutely had fun watching Skybox.


Jukebox The Ghost walked on stage at about 9:30.  Before they got on stage,  a guy walked out and gave the audience bottles of water and 2 or three containers to make bubbles. The bass player for  Tally Hall later commented how much he was liking the bubbles that continued on through Tally Hall's set.

Jukebox The Ghost are from the DC area.  The members are Ben Thornewill on piano,  Jesse Kristin on drums, and Tommy Siegel on guitar.  All three did vocals, with lead vocals shared between Ben and Tommy.  Their sound is Indie Pop Rock for lack of a better description.

The first thing I noticed about JTG is that they created a very full sound for a trio.  I think what contributes to that sound is the fact that Thornewill seemed to be an accomplished piano player rather than an keyboard player.  He played fully, using both hands, through each song rather than just playing parts, which more then compensated for not having a bass player  On JTG's recording and in concert,  Thornewill's vocals sounded like Ben Folds especially on the first song of JTG's set  "Good Day."

Jukebox The Ghost had a lot of fun with audience which seemed at it's fullest when they were on stage. (I was in the balcony, writing at a table. I had to tell people to stop blocking my view.) When the audience started screaming out song titles, Thornewill joked about being glad to be in the states.  He said that they just got back from Germany where the audience kept screaming out wanting to hear metal-rock or something similar.   Later, Thornewill said they were playing a lot of new material tonight and an audience member yelled out "You can play anything you  want."    We all laughed but it was true.  We all enjoyed anything the band played because the songs were that good.

It seemed like guitarist Tommy Siegel sang on a lot of the new material and there were many points where he shared harmonies with Ben Thornewill.   I think the smaller the bad, the more powerful and at times subtle a drummer has to be.  Jimmy Kristen was all that and more.  Toward the end of the set, the band brought out, trumpet player, Tim Cronin. (I think that was his name - things are often said quickly in concert) Thornewill said that they had just met.  Tim Cronin played on the out of Jukebox's 9th song which sounded great.

Jukebox The Ghost ended with 2 audience favorites "Under My Skin" and "Hold It In."  Of course, the crowd sang along.  I think if Jukebox were the headliner, the audience would have asked for an encore.  As I previously stated, they were that good.

I checked out Tally Hall after noticing their name on The Bowery Presents calender.   I liked what I heard and listened to them even more when I knew I was going to the show.   Tally Hall reminds of the bands I grew up with like Gruppo Sportivo, The Tubes, Frank Zappa and the Mothers of Invention , The Hello People, and Manhattan Transfer.  Note: I avoided the phrase "back in the day" because it sounds as stupid coming out of my mouth as pair of skinny jeans would look around my ass - not good!  But back to the topic at hand.   All the 70/80's bands I mentioned, cross different genres and all had comedic songs.  In many ways, Tally Hall is all those bands rolled into one.   Their lyrics have a wonderful sense irony and sarcasm set to music that tips over into classic rock.

At 10:30, the stage lights and the follow spots were tested and at 10:36 Tally Hall walked on stage to the sound of a beat box.  They had been out on stage earlier to set up their equipment but at that point they weren't in their traditional white shirts, vests and colored ties.   After Jukebox The Ghost, and the half hour wait, Tally Hall's  first song " Out In The Twilight" seemed a little subdued.  However, they made up for it by the end of their set.  (Starting high energy isn't always good, it leaves a performance no where to go.)

Tally Hall followed the first song with "Ruler of Everything," which was started off by Casey Shea with bullhorn in hand.  Casey was the sub for  Joe Hawley who was MIA for the evening or maybe for the tour.  After the song "You &  Me," the band did the audience favorite "Good Day."  Guitarist "Rob Cantor" changed from electric to acoustic guitar.  Casey played sleigh bells for part of "Good Day" as well as for the new song  "The Trap."   On the latter mentioned song, he also added maracas.

After the new song "Misery Fell,"  Keyboard player Andrew Horowitz played and sang a beautiful ballade and was backed up by bassist Zubin Sedghi who played a bell set (looks like a baby xylophone).   The next song of the set "Cannibal" was my favorite.  But the show really changed gears right after the song "Never Meant To Know."

As Tally Hall put down their instruments, Zubin Sedghi said "we'll be back in a few minutes."  All of Tally Hall's members walked out into the audience with equipment in hand.  The band members walked under the balcony where I was sitting and set themselves up to perform.   As all this was going on,  incidental music played under a voice over of a man with a phony British accent.  He said that everyone should sit on the floor facing the band.   He noted that the floor was dirty but said not to worry because there was someone who would be handing out butt protectors.   He wasn't joking, I looked below and there was a woman who was handing out what looked like paper table place mats AKA "butt protectors."

Even though Tally Hall had electric equipment, the sound was coming out of small amps.  Therefore,  once they started to play on the audience floor, the show turned into Tally Hall Unplugged.  The crowd became quieter to hear the band and was asked to snap as the band played "The Bidding."    As the song progressed,  we all suddenly heard trumpets.   I looked across at the balcony opposite me and there were two trumpet players, one of whom was Tim who played during Jukebox the Ghosts set.  There wasn't a sound balance between Tally Hall and the trumpets but it didn't matter at all because I think the spirit of fun and surprise was more important.

The next couple of songs were just as strong "unplugged" as earlier ones were on stage.  Great harmonies and melodies carried the rest of the show all the way to the end.  They did some audience favorites like "Taken For A Ride" with it's anthemic chorus and resounding trumpet melodies.  Andrew Horowitz sang  "The Whole World And You" as Rob Cantor accompanied him on ukulele.   They finished the set with Simon and Garfunkel's 1970's hit "Cecilia."   They asked the audience to sing along.  We all did and had a really good time doing it.

Tally Hall's new CD is due to come out in April.  I'm really looking forward to it - I'm betting every song is going to be a winner.

If anyone knows what the title of song number 7. was - please feel free to leave a comment.
Posted by Frank Grimaldi

Email ThisBlogThis!Share to TwitterShare to FacebookShare to Pinterest
Labels: All Postings, Tally Hall/ Jukebox the Ghost/Skybox