I paid $20 for my ticket to see The Airborne Toxic Event and got to see two additionally great bands. In these inflationary times, that's a better price than 2 for 1 paper towels from the 99 cents store. All three bands are from sunny southern California which in my head made them a metaphor for keeping warm on a cold rainy New York night.

Red Cortez  was the first band on the bill, with songs which had a punk/indie flavor to them and a subtle mexican musical influence. The quartet was led by front-man Harley Prechtel Cortez with a vocal delivery that seemed to propel the band to give 100% through out their performance. The audience respectfully listened to Red Cortez and stayed with the band all through their set but didn't clap along when prompted.  Being in the audience, it was apparent to me that the band was well received but I'm not sure it was apparent on stage.  The reason I'm stating this is that as Harley was introducing a song he said “you don't care, because you don't even know who the fuck we are.” Some people might have found that offensive but I just found it honest.


Red Cortez's set was played well and was tightly executed. They did more than 10 songs which seemed to go by quickly. The song I enjoyed the most in their set was a new song for the band for which Cortez switched from guitar to piano. The song's interesting lyrical pace was a bit different from other songs in the bands set. With the exception of the aforementioned song,  Cortez played guitar for the entire set in bare feet. The other members of the band, who kept their shoes on, are Ryan Kirkpatrick on bass and vocals, Diego Guerrero on drums, and Calving J. Love on guitar.


The Henry Clay People reminded me of Mathew Sweet's CD “100% Fun.” Their 70's sensibility was so strong that I could easily imagine wood wall paneling behind them. The band was lead by guitarists and vocalists, Joey and Andy, who I am not sure but may be brothers. They played lots of power chords and Joey (maybe it was Andy) did most of the vocals which sounded at times like Ian Hunter from Mott The Hoople. The keyboard player who was announced as a new addition to the band did a lot of piano riffing a la Billy Preston.

The Henry Clay Peoples stage presence was that of a group of guys goofing around in their parents basement. So much so, that they asked the audience if they wanted to hear a Jackson Brown or a T Rex cover for the bands last song. It was like the audience dropped in on their rehearsal and they wanted to give us a treat. They played "Bang A Gong." Their set was good music, a lot of fun and a great lead up to Airborne Tox.


The Airborne Toxic Event frontman, Mikel Jollett said to a sold out audience “ I don't know how you found out about us but I'm glad you're all here.” I think I know how. When your band is that good – word of mouth takes off.  Airborne Toxic is more than good, they are exceptional. 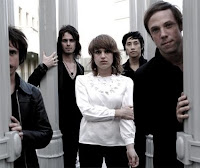 One of the many things I like about them is that each member has his or her own personality on stage. First and foremost is Mikel Jollett, the bands songwriter, who talks and acts like he's straight of the 1950's Beat Generation. By Mikel's side is Noah Harmon who comes off like Lucian in the Underworld vampire films. Noah plays a mean bass but what is even cooler is to watch him play electric bass with a bow as he stands next to viola player Anna Bulbrook. Along with viola, Anna plays keyboard and does backing vocals. In a blue sequined dress, Anna was a powerhouse sporadically bopping around stage with a tambourine. She even body surfed during one of the encores. Steven Chen is the band's handsome guitarist and keyboard player responsible for many of the bands ambient riffs (He also has a great hair cut.) Last is Tox's drummer Daren Taylor, keeping steady pulsating beats while looking like he could be one of the Village people (It's probably the mustache he's sporting). Daren kicked off Airborne Tox's set by playing a tightly driving drum beat as each member stepped on stage playing their instruments.

For their set, The Airborne Toxic Event managed to do, most of the songs from their debut CD along with two covers. They did “This Magic Moment” originally recorded by the Drifters but also covered by Jay Black and The Americans as well as Lou Reed. Airborne's version was less of a straight forward cover and more danceable with a hypnotic beat. I was unfamiliar with the second encore which was a cover of a Yo Lo Tango song but I did enjoy it.

With a name like The Airborne Toxic Event and quite a few sad songs, I didn't expect Airborne's set to be so upbeat. But their set pretty much remained upbeat from the beginning, only departing from that feeling when the material warranted it. One of the few times when they did get more intense was during the acoustic portion. Mikel Jollett sang a new song and then “Wishing Well” which is the opening cut of their CD. He set up “Wishing Well” as a feeling that person gets a 2 o'clock in the morning when they don't want to be in their own skin. I have to give props to Jollett because he sang both songs sitting at the very edge of the stage. He managed to stay in each song's character and kept his concentration through out the songs while people were screaming out I love yous and flashing their IPhone cameras.

The audience loved Airborne Toxic. They sang along to most of the material on Airborne's CD especially “Gasoline.” When it came to Toxic's most well known song “Around Midnight”, the fans cheered, sang along and were really happy. I was glad they were doing the song as well but I had to wonder if everyone in the audience understood how painful the moment is that is being described in the song. It was just a thought, I guess even if the audience didn't relate to the situation, they probably did relate to the emotion behind it.

I was having a good time, so I wasn't waiting for or expecting an encore but once it was upon us it was the best part of the show. The first encore is my favorite song “Happiness is Overrated” which I didn't realize they hadn't yet done. After “Overrated” Mikel asked the other two bands back out on stage and do the late Jim Carroll's “ Those Are The People Who Died.” (Jim Carroll and T Rex were the two times I felt comfortable knowing all the words – so you can guess my age group.) If memory serves me right, the last song of the evening was “Missy” which was interwoven with two Smith songs “Ask ” and “Panic,” and then band introductions.

The show was a good full evening, you can quote me. G.F.E.

You want to see great pictures of this show, go to:
http://www.prefixmag.com/photos/airborne-toxic-event-red-cortez-henry-clay-people-/